After 10 years of peaceful protests, villagers can return home 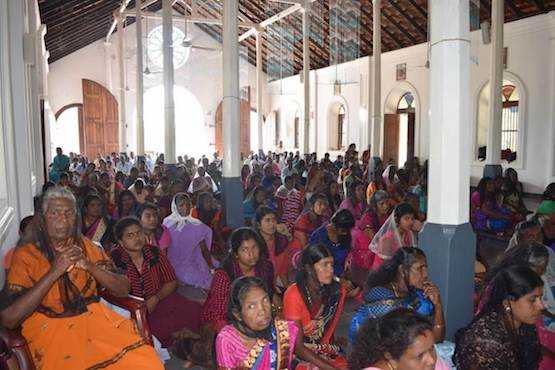 After learning that much of their land will be given back by the Sri Lankan navy, villagers held a Mass in the Church of our Lady of Assumption built in 1786. (Photo by Rosarian Lambart)

Catholic Tamils in northern Sri Lanka have won an important victory in retrieving land and property taken from them by the military during the island nation's civil war.

Villagers from Mullikulam in Mannar Diocese had been protesting ever since their homes, agricultural lands and a church were usurped by the Sri Lankan Navy in 2007 two years before the country's civil war ended in 2009. On April 30, after decades of protest, some of their properties were returned.

Sri Lankan Navy Commander Vice Admiral Ravindra Wijegunaratne met with the villagers, three priests and representatives from the Catholic lawyers association on April 29, over a month after their latest occupy-style protest began on March 23.

Father Anton Thavaraja, parish priest of Our Lady of Assumption in Mullikulam, said the military official promised to release church premises, 27 houses and some farmland.

"The navy commander agreed to release the church building and premises, paddy lands and 27 houses which were being used by the navy. He asked for six months to evacuate them," Father Thavaraja told ucanews.com.

"So, with that promise, our people decided to give up their 38-day protest, take their belongings and came to the Our Lady of Assumption church in Mullikulam," said Father Thavaraja. "However, a lot of paddy land and two ponds remain under navy control." Villagers having fellowship lunch on April 30 to celebrate their victory after they were allowed to return to their land after it was commandeered by the Sri Lankan Navy in 2007. (Photo supplied)

The villagers, who had been camped outside the entrance to their occupied village, packed up and stayed the night of April 29 in the church. The following Sunday they celebrated their victory with relatives from neighboring villages and activists who supported their struggle with a thanksgiving Mass.

Mariyadasan Ravel, who lost two sons during the Sri Lankan civil war, said they would visit their former homes next week. "The villagers went to their residential areas and showed where the former boundaries used to lie and the navy promised to survey what lands should be released," said Ravel.

"On Thursday, we can return to our residential areas but we will have to live in temporary shelters until we build new houses with the help of the government," he said. Some villagers will continue staying at the church until their shelters are built.

Mary Matilda Coonghe, said that she was happy and relaxed to be staying in the church. It was formally only accessible for Sunday Mass and important days of the Catholic calendar and people could only attend such services via a navy bus.

"About 130 families are living on church grounds and have an opportunity to pray every day. But it is not easy as there are only four toilets and six water tanks for all the families," said Coonghe.

"We sleep inside the church and have put up a few temporary huts for cooking. What is good is that our children can easily attend the school which is next door without having to wait for the navy bus," Coonghe added. All Mullikulam villagers are Tamil Catholics and they are the parishioners of the Church of our Lady of Assumption. (Photo supplied)

As part of the protests, Bishop Joseph Kingsley Swamipillai of Mannar along with 40 priests, 300 parishioners from St. Sebastian Church in Mannar marched to Mullikulam where he handed over a petition to regain the navy occupied village to the Government Agent of Mannar for the Sri Lankan president.

In 2007, the entire population was evacuated and the Navy North-Western Command Headquarters established there, occupying their entire village. About 120 families were temporarily resettled at Malankaadu, 150 families in the village of Kayakuli and about 100 families relocated to India to escape the war.

The villagers had the understanding that their land — which they have permanent title deeds to — would be given back upon the war's conclusion.