The Taliban takeover of Afghanistan continues to dominate headlines across Asia and the world. The struggle against rights abuses, corruption and injustice lingers, but there are also glimmers of hope and resilience.

The Jesuits, serving in Afghanistan since 2004, have suspended their mission after Taliban fighters captured Afghan capital Kabul on Monday, prompting tens of thousands of panicked Afghans to race against time to flee the country.

Terrible and chaotic scenes emerged with thousands of people rushing frantically to board departing planes at Kabul airport as countries evacuated their diplomats and citizens. Two priests involved with the Jesuit Refugee Service were waiting to be evacuated. Four Missionaries of Charity nuns were also stranded.

Earlier, Father Jerome Sequeira, head of the Jesuit mission in Afghanistan, wrote an open letter detailing how the country was falling apart as the Taliban advanced toward Kabul after claiming vast territories. The Jesuits have trained 300 young teachers and assisted in educating more than 25,000 young boys and girls in four provinces.

In 2014, suspected Taliban fighters abducted Jesuit Father Alexis Prem Kumar in Afghanistan, but he was released in February 2015. 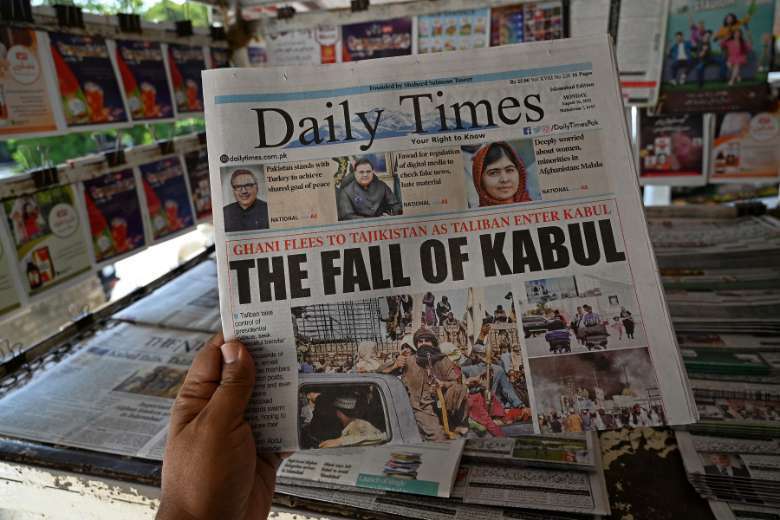 A man holds a newspaper displaying front-page news about Afghanistan at a stall in Islamabad, Pakistan, on Aug. 16 as the Taliban took control of the country after a 20-year war. (Photo: AFP)

The return of the Taliban has prompted the governments of Muslim-majority Pakistan and Bangladesh to adopt a somewhat welcoming stance, triggering concerns among church officials. Pakistani government officials said they would accept any Afghan government that has the backing of Afghan people and noted that “the new, civilized Afghan Taliban would prefer talks to guns.”

Rights activists have criticized such glorification of the Taliban. Camillian Father Mushtaq Anjum said the Taliban’s victory would embolden extremist forces in Pakistan and minorities, especially Christians, would suffer badly. Similarly, Bangladesh’s government said it would welcome any government in Afghanistan, even the Taliban, if it is formed by the people of that country. Holy Cross Father Liton H. Gomes, secretary of the Bangladesh Catholic bishops’ Justice and Peace Commission, pointed out that the country has struggled against Islamic militancy for decades.

He said the militancy originated in the mujahadin and Taliban of Afghanistan, adding that the government’s ties with the Taliban regime will trigger the rise of militancy again.

The High Court in southern India’s Kerala state has ordered Cardinal George Alencherry of the Eastern-rite Syro-Malabar Church to face trial on seven criminal charges related to his role in controversial land deals.

Church officials said an appeal to challenge the order before the Supreme Court was underway and claimed the allegations were engineered to tarnish the cardinal. The court order is the latest development in the controversial land deals that surfaced in November 2017 after a group of priests publicly accused Cardinal Alencherry of selling land plots of Ernakulam-Angamaly Archdiocese over two years, incurring losses of about 10 million US Dollars.

The Vatican removed the cardinal from the post of archbishop, but he remains the head of the Syro-Malabar Church. The archdiocese reportedly paid 60 million rupees or 860,000 US dollars in fines to the Income Tax Department for evading taxes by showing lower prices on land documents than market rates.

The clashes erupted after police attempted to drive away protesters in major cities including provincial capital Jayapura, where they were demanding the release of pro-independence activist Victor Yeimo, who has been charged with treason. In Yahukimo city, a man was shot in the stomach and taken to a local hospital, while at least two protesters suffered head injuries from being hit with rifle butts and rattan in Waena city. Meanwhile, in Jayapura, the police intercepted pastor Benny Giay, chairman of the Synod of the Kemah Injili Church, who came with his entourage to speak to the local parliament. Police said they acted to disperse mass gatherings, which are banned to prevent the spread of Covid-19.

Activists, however, blamed the use of police force as part of ongoing discrimination and racism against Papuans. Since the 1960s, the region has seen thousands killed and displaced amid fighting between the military and Papuan separatists seeking independence from Indonesian rule.

Filipino Catholics have paid tribute to a state auditor who spearheaded the investigation into a scam costing 67.3 billion pesos equivalent to 1.35 billion US dollars, in the country’s Department of Health.

Lawyer Jake Cimafranca, 39, died recently of a heart attack. He had been investigating deficiencies in the use of Covid-19 funds by high-ranking health officials as a state auditor of the Commission on Audit. Prominent Catholics, including De La Salle Brother Armin Luistro, Jesuit Father Albert Alejo and former state audit commissioner Heidi Mendoza, hailed the late lawyer as a hero who has inspired people to continue to fight for better and transparent governance. President Rodrigo Duterte, however, defended the Health Department and disregarded Cimafranca’s report, claiming it was impossible to steal such a huge amount from public coffers.

The revelation about fund embezzlement sparked a massive public outcry. Filipino health workers, including poorly paid nurses and doctors, have threatened to quit en masse and called for protests if the endemic corruption in the department is not halted and their due benefits are not released.

A court in Kaili city in Guizhou province of southwest China has jailed pastor Zhang Wenying and three other clergy from the Seventh Day Adventist Church. Zhang was sentenced last Saturday to 12 years and her co-defendants to 3-6 years.

They were accused of collecting offerings for the church without authorization from the Three-Self Church, a state-controlled body of Protestant and Evangelical churches in China. The Adventists joined the Three-Self Church in 1951 as part of their survival strategy under the communist regime. However, church leaders and members have faced pressure for years as they were more interested in practicing self-styled theology than what state-controlled bodies dictated. Before and during the infamous Cultural Revolution in the time of Mao Zedong, leaders of the Seventh Day Adventists were arrested and jailed, while public religious activities of churches were forcibly halted.

In 2019, an Adventist pastor and seven others were sentenced to five years in jail for publishing religious material without authorization in Jingzhou city of Hubei province in central China.

Christians in South Korea joined an annual prayer for peaceful reunification of the Korean Peninsula on the 76th anniversary of National Liberation Day.

The event last Sunday, jointly organized by the World Council of Churches and the Korean Christian Federation, is a celebration of the independence of both North and South Korea from Japanese colonization in 1945. The program also included sightseeing flights to the Dokdo islets for the first time. Students perform a group dance in a square near the Arch of Triumph as North Korea marks its 76th National Liberation Day in Pyongyang on Aug. 15. (Photo: AFP)

Dokdo is a disputed territory between Korea and Japan, and the islets are a military zone where passenger planes are not allowed. Following the end of the Second World War, the United States and the Soviet Union divided Korea into two and efforts to unify two sides failed in 1947 due to disagreements between the superpowers. Consequently, the Korean War of 1950-53 saw the North invade the South, with about 4 million lives lost and 10 million families divided.

The reunification of the two Koreas has been a major priority of Catholic bishops for decades.

The Catholic Church in Timor-Leste is looking forward to opening the first Catholic university in the country this year. Salesian Archbishop Dom Virgilio do Carmo da Silva of Dili Archdiocese met with Prime Minister Taur Matan Ruak on August 13 and expressed optimism about launching the university.

The meeting came about a month after the archdiocese formally applied for permission to start the first church-run university in the Catholic-majority country. Timor-Leste is a former Portuguese colony with about 1.2 million people. The country gained independence in 1999 following occupation by Indonesia after Portuguese rule ended in 1975. Salesian Archbishop Dom Virgilio do Carmo da Silva of Dili meets with Prime Minister Taur Matan Ruak on Aug. 13 to discuss the progress of the application he submitted to start the first Catholic university in the country a month ago. (Photo: Timor-Leste Prime Minister's Office)

Despite being rich in natural resources including offshore oil and gas reserves, it remains one of the poorest nations in Southeast Asia and more than 30 percent of the population is illiterate. The upcoming Catholic university aims to fill gaps in the country’s higher education sector and has been a long-running dream of church leaders.

Church officials plan to upgrade the Catholic Religious Institute in Dili into the university.  It will have faculties of social science, education, humanities, health and agriculture. Some 50 educators have signed up to join the institution.

The Catholic Church in Myanmar’s conflict-ridden Kachin state has stepped up testing to detect Covid-19 in internally displaced person camps. Myitkyina Diocese has sent mobile medical teams to the camps for testing and medical check-ups, while Caritas is offering medicines, face masks and pulse oximeters.

Aid groups say the situation inside the crowded camps is extremely worrying as maintaining social distance is very challenging and access to health care is unavailable. Hundreds of positive cases have been detected in camps. Kachin is one of several Christian-majority states that has experienced renewed fighting and displacement of thousands since the military takeover of Myanmar in February that intensified the plight of ethnic communities amid the pandemic. While the military has been accused of brutal attacks on ethnic villages, a rebel group in Christian-majority Karen state recently admitted massacring 25 civilians in June.

Two commanders of the Karen National Defense Organization confessed to rights body Fortify Rights that their soldiers were responsible for the killings but claimed the victims were army spies. The Karen National Union has promised to investigate the massacre.