Asia is reeling from the fallout of the Taliban takeover of Afghanistan and the lethal spread of Covid-19 while vulnerable and marginalized communities call for rights and justice.

A Christian leader in Afghanistan has urged the country’s Christians to keep a low profile and stay home to avoid Taliban persecution. He told US-based International Christian Concern that Afghan Christians have been living with fear and uncertainty since Taliban fighters captured capital Kabul and took control of the country.

He warned that although the Taliban have announced a general amnesty, there are fears Christians will be targeted by Taliban fighters patrolling the streets of Kabul and other cities.

Christians in Afghanistan are mostly converts from Islam and are estimated to number ten to twelve thousand. Christians live secluded lives fearing persecution by extremists. Radical groups like the Taliban consider denouncing Islam as a disgrace and converts can face dire consequences.

In a recent video, an Afghan Christian tearfully pleaded with Christians across the globe not to abandon the country’s underground church and pledged that Christians will “continue God’s works” despite Taliban rule. 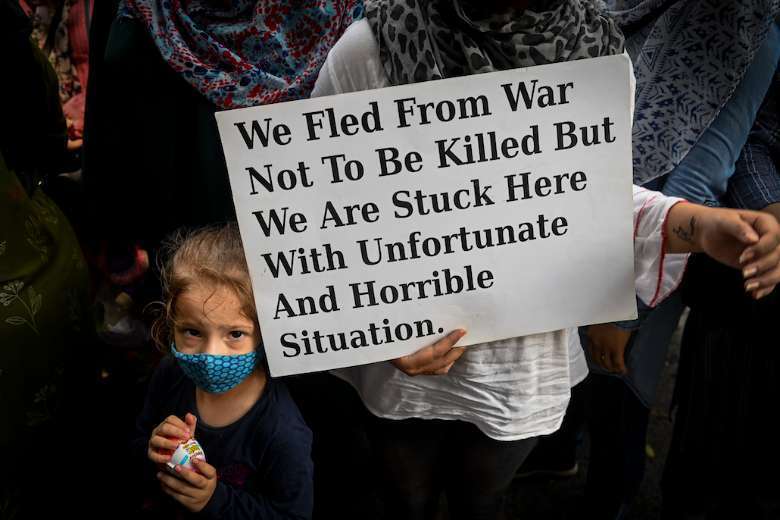 In Pakistan authorities have demolished St. Joseph Catholic Church in an anti-encroachment drive in Karachi despite protests from Christians and various groups.

For years, the church in this Sindh province had served more than 300 Christian families. Local officials claimed the drive was launched after a court order to remove encroachments near two narrow streams passing through Karachi in the wake of the 2019 flash floods that inundated the city. The anti-encroachment squad of the Sindh government returned on Aug. 24 and tore down St. Joseph Church despite protests from the Christian community. (Photo supplied)

In June, UN human rights experts called on Pakistan to stop evicting close to 100,000 people living alongside the waterways.  The demolition of the church has sparked nationwide outrage and drawn condemnation from all seven Catholic dioceses.

Bishop Samson Shukardin of Hyderabad condemned the act and termed it “totally wrong” as mosques and churches were spared during similar operations in the past.

The PUCL has worked to protect the powerless and to create a democratic and just society since 1976. Paul Pradhan, who died in July, was a champion of rights and the empowerment of women, Dalits and tribal people. The NSF was formed after an anti-Christian riot in Odisha in eastern India. The riot started after Maoist rebels gunned down a Hindu radical leader in Kandhamal district on August 23, 2008, and Hindus blamed Christians for the murder.

The brutal violence by Hindu extremists continued for about seven weeks, leaving over 100 Christians killed and Christian women including a Catholic nun raped. Many Christian houses and churches were burned down.

Rohingya Muslims and activists in Myanmar and Bangladesh marked Genocide Remembrance Day on Wednesday. It was the fourth anniversary of a genocidal military crackdown that left thousands massacred and forced tens of thousands to flee their homes in Rakhine state of Myanmar in 2017.

Civil society groups and women’s organizations marched on the streets calling for prosecution of the military junta by the International Criminal Court. In Bangladesh, Rohingya refugees held small rallies to mark the day despite a ban due to Covid-19. Rohingya refugees remembered and prayed for the dead, called for justice and expressed a desire to go back home. Aid workers lament that while Rohingya repatriation talks remain stalled since February’s military coup in Myanmar, funding for refugees has declined significantly.

More than 740,000 Rohingya have fled to Bangladesh since August of 2017, and tens of thousands languish in internally displaced persons’ camps in Rakhine.

Police in Chengdu, the capital of Sichuan province in China, have jailed two Protestant church members and detained more than dozen minors. Media reports and video footage showed police beating up members of the Early Rain Covenant Church who gathered for a Sunday meeting.

Police later released the children after questioning them in a local police station, but church members were placed in detention for 14 days. The Early Rain Church, founded in 2008, has some 500 members and has faced pressure for years. In December 2019, a court sentenced church founder pastor Wang Yi to nine years in jail on charges of "incitement to subvert state power" and of "running an illegal business." Earlier, in December 2018, police detained church members and beat them up in custody.

Observers say the crackdown on the church and other Christian groups increased after 116 pastors including pastor Wang signed and issued a critical statement after the Chinese Communist Party adopted highly repressive regulations on religious affairs in early 2018.

Police in Indonesia have arrested a Christian YouTuber after Muslims filed complaints accusing him of blasphemy. Muhammad Kace, a former Muslim who converted to Christianity, is accused of insulting Islam and the Prophet Muhammad by claiming the prophet was “surrounded by devils and liars.”

He uploaded a video with controversial comments on his channel on Monday and it went viral. Kace was arrested in Bali and police discovered he had uploaded at least 400 videos on YouTube insulting Islam. Media reports says Kace was an Islamic cleric in West Java and taught at an Islamic boarding school. He began criticizing Islam after he became a Christian in 2014. Indonesia’s top Muslim clerical body, the Indonesian Ulema Council, called on people to let the law deal with Kace.

Under Indonesian laws, blasphemy is a criminal offense and an offender can face up to five years in jail.

Officials in Catholic-majority Timor-Leste have warned that the country’s health system is in danger of collapsing due to a spike in cases of the Delta variant of Covid-19.

The tiny Southeast Asian country registered 532 new cases on Tuesday, the highest since the pandemic hit last year. The rising cases include many health workers and most infections are being reported in capital Dili and Ermera. A resident in Ermera in Timor-Leste is vaccinated on Aug. 19. The government says the country's health services are in danger of collapsing due to the explosion in new coronavirus cases. (Photo: Ministry of Health)

Guido Valadares National Hospital in Dili, the country’s main Covid-19 referral hospital, has seen 116 of its medical staff, including 26 doctors and 53 nurses, infected with Covid-19, leaving the hospital dangerously understaffed.

Timor-Leste earned global praise last year for successfully keeping Covid-19 at bay despite a lack of resources. However, the new outbreak has gripped the nation of some 1.3 million people. The country has recorded a total of 15,296 cases and 52 deaths, with the majority in recent weeks.

Filipinos have urged famed boxer turned politician Manny Pacquiao to give up boxing and his dream of leading the country as president. They have also called on him to join the opposition to fight against candidates of controversial current President Rodrigo Duterte in next year’s presidential election.

Pacquiao is a champion boxer who has won 12 major world titles. However, he lost to Cuba’s world welterweight champion Yordenis Ugas on Sunday in Las Vegas. It prompted many to urge him to say an honorable goodbye to the ring. Manny Pacquiao is being urged to give up boxing and his dream of becoming president of the Philippines. (Photo: AFP)

He has been a senator in the Philippines since 2016. Pacquiao recently expressed his desire to run for president from his party, PDP-Laban. Critics say the millionaire boxer should hang up his gloves and serve people as a philanthropist.

Father Emman Afable from Sorsogon city said it was time for Filipinos to vote for leaders based on competence, not on popularity. The priest noted that in 1998 Filipinos elected popular actor Joseph Estrada as president but he was later impeached and jailed for corruption.

Vietnam’s government has deployed thousands of troops and public security forces to impose strict restrictions on movement in southern parts of the country as the Delta variant of Covid-19 continues to wreak havoc.

On Sunday, Prime Minister Pham Minh Chinh called on people to stay home or where they are, separating house from house and ward from ward. While troops and security forces supervise social distancing and other measures, they have been told to help in providing medical and essential services as well as food supplies for people. Catholic volunteers pray in front of a statue of Jesus before setting off to serve at hospitals in Binh Duong province on Aug. 15. (Photo: giaophanphucuong.org)

In the past week, Vietnam has registered record-high infection rates with an average of 10,680 daily cases. The country has registered more than 358,456 infections and over 8,666 deaths from Covid-19.

South Korean Catholics joined special Masses and other commemorative events to mark the 200th birth anniversary of Saint Andrew Kim Taegon, the first native Korean priest and one of its most revered martyrs.

On Saturday, the birthday of the saint, special Masses were offered in 1,750 churches. The Shrine of Solmoe in Daejeon Diocese, the birthplace of the saint, organized programs including Mass, a symposium and art exhibition to honor the saint at the newly established Church of Memory and Hope. Andrew Kim was born in 1821 and was baptized at the age of 15. He studied at a seminary in Macau, China, for six years and was ordained a priest in Shanghai. Back in Korea, he pioneered evangelization along with foreign missionaries, which triggered the ire of rulers of the Joseon dynasty who brutally persecuted Christians.

Kim was arrested, tortured and beheaded on September 16, 1846. During his visit to Korea in 1984, Pope John Paul II declared Andrew Kim and 102 martyrs as saints.