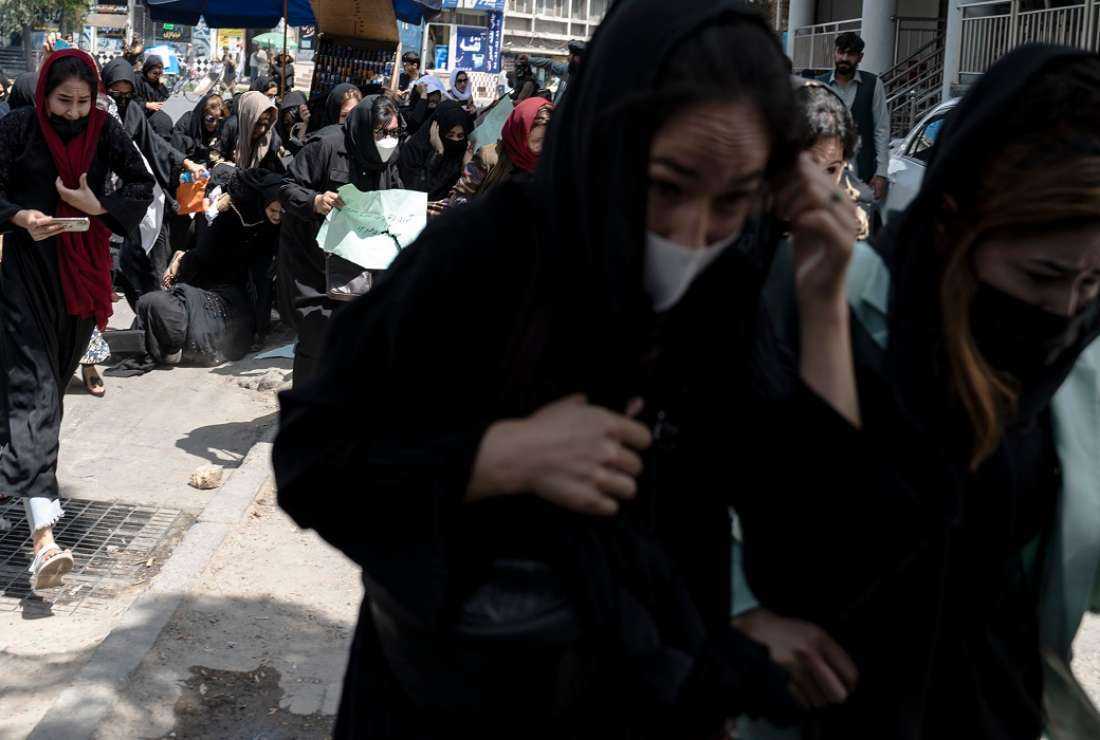 Taliban fighters beat women protesters and fired into the air as they violently dispersed a rare rally, days ahead of the first anniversary of the hardline Islamists' return to power, in Kabul on Aug 13. (Photo:AFP)

Afghanistan is the only nation that currently limits official education by gender — a major sticking point in gaining international legitimacy for the Taliban government.

Afghan girls are banned from receiving secondary education, and there is no ministry for women’s affairs, as women are not allowed to work and pursue a career in the landlocked Central Asian nation. A year under the Taliban, triumphant after two decades of insurgency, has made life miserable for women as the country is governed by a strict interpretation of Islamic law.

At checkpoints, morality police intercept women who are not covered from head to toe in public.

Many Afghan women, particularly those in cities, once harbored the ambition of becoming doctors, lawyers and government officials, and explored international opportunities, before the Taliban took over on Aug 15 last year. Months after the Taliban seized power, the regime closed girls’ secondary schools indefinitely.

Before Aug 15, 2021, men and women picnicked together and chatted over coffee. Girls wore knee-length dresses and jeans in public and robots were introduced in schools as part of academic programs. Clean-shaven men wore Western suits to work, while women held some high-ranking positions.

Over the past two decades, Western nations have showcased many of those facets of life as signal achievements due to their intervention. But the Taliban has a different vision for the country, so they have been reshaping the social fabric.

The new rulers have issued a flood of edicts, curtailing women’s rights to institutionalize patriarchal customs and erase many vestiges of an American-led occupation in their nation-building efforts to create an Islamic emirate.

The Taliban has curbed women’s freedom by barring them from most government jobs, secondary education and from traveling more than 70 kilometers without being accompanied by a male guardian.

In May, the religious outfit decreed that women will have to wear the Islamic face veil for the first time in decades. If a woman refuses, her male guardians will be sent to jail for three days. Fortunately, this is not strictly enforced.

So far, the Taliban has avoided returning to the brutal public floggings, amputations and mass executions that marked their earlier rule in the 1990s.

However, to stamp out dissent, the Taliban has employed tactics like door-to-door searches and arbitrary arrests which have drawn condemnation from international human rights monitors and the cash-starved country is not in a position to secure development aid and, above all, secure recognition from other governments; its pariah state status continues.

"Though there have been minor sporadic protests by women over the past year, the Taliban has crushed any form of dissent"

In a report released in late July, human rights group, Amnesty International, said that women and girls in Afghanistan are being stripped of “their rights to education, work and free movement”.

For men, the Taliban insist they grow beards, wear traditional Afghan clothes and prayer caps. They have been told to stop work for prayers. Music is banned and TV shows and movies are removed from the public airwaves.

Currently, there is hardly any opposition to Taliban rule. However, women in Afghanistan proved they have enough fire left in their bellies and took to the streets on the occasion of the first anniversary of the Islamists' return to power. Though they were small in number, their message was clear.

They shouted for “bread, work and freedom” while carrying a banner that read: “August 15 is a black day.” But the Taliban fighters dispersed the female protesters by firing into the air.

Though there have been minor sporadic protests by women over the past year, the Taliban has crushed any form of dissent that seeks more freedom for women.

The Taliban claim that they have deep public support for curtailing women’s freedom as they have restored Afghanistan’s traditional status. The Ministry for the Promotion of Virtue and Prevention, which has issued the decrees, claimed they are all for the protection of women, not to oppress them.

"In all possibility, those who oppose them could be declared anti-Islam and face extreme punishment under Sharia laws"

It must be believed that the majority, at least the majority who have a voice, support the Taliban’s edicts against women’s freedom, and in all possibility, those who oppose them could be declared anti-Islam and face extreme punishment under Sharia laws.

Left with no choice, Afghan women appealed to the United Nations and on Sept 12 urged international action to address the gender oppression in their country under Taliban rule.

Richard Bennett, the special rapporteur on the rights situation in Afghanistan, has described the situation as "gender apartheid.”

As the economic woes are increasing in the country due to a lack of international recognition, former Afghan president Hamid Karzai called on the Taliban to reopen girls' high schools.

"We ask the acting Islamic government to open the schools," he tweeted.

The Taliban’s initial pledge to open secondary schools for girls was welcomed by the international community and was seen as the Taliban's willingness to follow a moderate line.

THERESE
And this is a surprise? The Taliban is "a fundamentalist Muslim movement whose militia took control of much of Afghanistan from early 1995, and in 1996 took Kabul and set up a radical Islamic state." It's not a democracy.
Reply