Cardinal Tagle reminds participants that the working document is meant to be analyzed, ripped apart 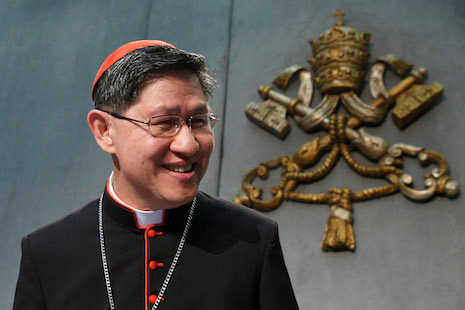 Cardinal Luis Antonio Tagle of Manila says the synod's working document was meant to be thoroughly analyzed, "otherwise there is no point in calling 300 people (to Rome) just to say, 'Yes, this is it.'" (Photo by CNS)

By Cindy Wooden and Carol Glatz for Catholic News Service

The first week of the Synod of Bishops on the family ended with near unanimous calls to be more positive in describing family life today and to show more appreciation for Catholic families living close to the church's ideals. But there were also widespread questions among synod participants about the work they are expected to produce.

After listening to speeches and working in small groups Oct. 5-8, synod participants listened to the small group reports Oct. 9.

During a press briefing Oct. 9, Cardinal Luis Antonio Tagle of Manila, Philippines, one of the synod presidents, told reporters that changes in the synod's method created some confusion, especially for members who have attended past synods and were accustomed to drawing up a list of propositions to give to the pope. Instead, they have been asked to amend the synod's working document.

The speeches in the synod hall the first week and the discussions in the small groups focused on the first chapter of the working document; all the small group reports offered suggestions for improving the text while some criticized it harshly, saying much of the text was "flawed," "inadequate, especially in its theology," and too Western-centric.

But the working document is meant to be analyzed and ripped apart, Cardinal Tagle told reporters.

"In fact it is called a martyred document," the cardinal said. "It must be ready to be martyred, to be shot. Otherwise there is no point in calling 300 people (to Rome) just to say, 'Yes, this is it.'"

The working document includes input from so many different people that the main aim in drafting it was to get everyone's opinion in and not to produce "a synthetic, cohesive treatise on the vocation and mission of the family," said Cardinal Tagle, who helped draft the text.

The criticism, therefore, was expected and is "very much welcome," he added.

Almost all the groups insisted whatever document the synod produced at the end would need to be clear, simple and realistic.

Archbishop Joseph E. Kurtz of Louisville, Kentucky, president of the U.S. Conference of Catholic Bishops, told reporters at the briefing that his small group called for a text using understandable words that "inspired and attract."

Several groups also insisted the document should include more quotations from Scripture, a clearer reaffirmation of church teaching and, according to one Italian group, ample citations from early church theologians.

Cardinal Tagle said even though the text would be rooted in the Bible, the language used should be "more edifying or encouraging," and less verbose. There was a recognition that a final document would have to avoid so-called "church-speak," especially if it was going to speak to young people whose formation might not be so sophisticated, he said. But because it is a work in progress, "We will see what will happen."