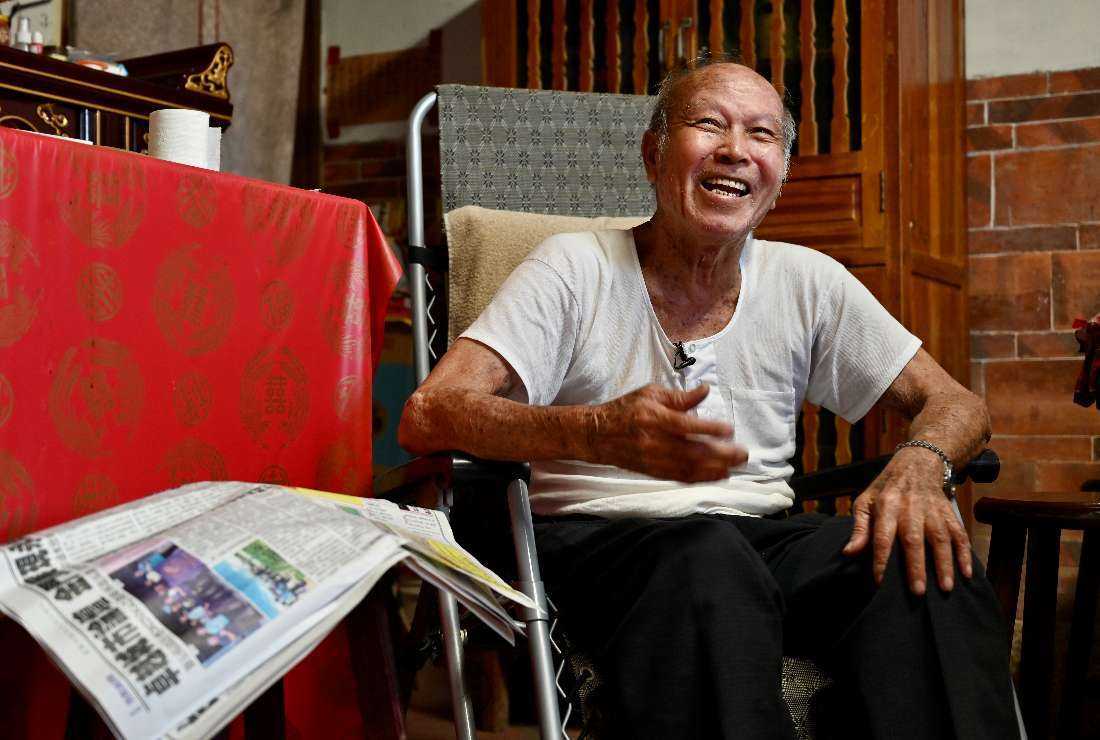 Taiwanese veteran Yang Yin-shih speaking during an interview with AFP on the Kinmen islands on Aug. 11. (Photo: AFP)

Not far from the rusted-out tanks and anti-landing spikes that litter the beaches of the Taiwanese island where he lives, 92-year-old veteran Yang Yin-shih reads his newspaper in the shadow of the enemy that regularly adorns its pages.

Several miles from Yang's home on the tiny Kinmen Islands is the Chinese mainland, where he can see for himself the military might that threatens his homeland.

Beijing last week staged unprecedented war games around the self-ruled democracy it claims as its own in a hailstorm of rage after US House Speaker Nancy Pelosi visited Taiwan's capital.

As Chinese vessels dotted the Taiwan Strait and missiles plunged into the waters surrounding the island, a real risk of conflict reared its head.

But Yang was unfazed by the latest beating of Beijing's war drum despite the islets of 140,000 people sitting just 3.2 kilometres (two miles) across from the Chinese city of Xiamen.

"I am not nervous. Kinmen is calm and quiet," he told AFP, cracking a smile between his morning routines of watching television and strolling his neighbourhood.

Yang witnessed China's deadliest bombardment of Taiwan's closest islands to the mainland more than 60 years ago and says the latest drills are small-fry in comparison.

In 1958, China fired more than a million shells at Kinmen and nearby communities, killing 618 people and injuring more than 2,600.

"The (1958) bombardment was more nerve-wracking. It was more tense back then," he said.

"It's hard to tell the situation -- whether (China) intends to intimidate or has plans to attack."

Despite the bitter memories of conflict and current tensions, many Kinmen residents hold friendly views of China after years of close trade and travel links across the short stretch of sea.

Taiwan suspended ferry services to Chinese cities because of Covid-19 but Yang Shang-lin, a 34-year-old in the tourism sector, said he hopes Kinmen will reopen to Chinese visitors soon despite Beijing's sabre-rattling.

"Taiwan is more free and we don't want to be ruled by China," he said. "But we have to make ends meet."

Yet there is a divide on the islands, with some Kinmen residents ready to defend their homeland against Chinese aggression.

"Should there be a war I will fight," said Huang Zi-chen, a 27-year-old civil engineer.

"I was born in this country and I have to go through thick and thin when my country needs me," he told AFP during a break from supervising a construction project.

While the Kinmen Islands once served as a natural barrier to invasion, Beijing can now easily bypass them with its superpower armoury of missiles, jets and aircraft carriers.

Car rental worker Yang believes "the disparity in military strength is far too great", leaving Taiwan with little hope of beating back a Chinese onslaught, especially given Kinmen's size and proximity to the mainland.

"I would not want to go to the battlefield since there would be no chance of winning," he said.

James Chen, an 18-year-old student who is one of the few of his age not to have left to study or work in Taiwan's cities, said fighting should be left to professional soldiers.

"I think there is a 50-50 chance of China using force against Taiwan, but we have no control over China, we should just be ourselves."

That means life is very much carrying on as normal in Kinmen.

Residents are not rushing for the bunkers to hide or supermarkets to stockpile, but rather singing karaoke at home and dining out with friends.

As 73-year-old Cheng Hsiu-hua played card games with her neighbours outside their homes in one of Kinmen's quiet streets, she brushed off the possibility of Chinese troops one day landing on their shores.

"No, we are not afraid. They (Chinese troops) won't come over here," she said.

If Beijing did bring arms to bear, the elderly Yang says he would rather accept peaceful reunification than conflict.

So he offers a message to the Chinese government -- one learned from the legacy of the bombardment he saw with his own eyes decades ago.

"There will be death on both sides."