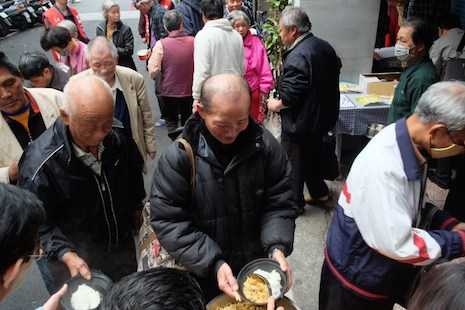 By Amber Wang for AFP, Teipei

With an advertising sign in his hands, Liao Chin-chang stands wearily at an intersection near a new luxury apartment building in Taipei, trying to earn money as a walking billboard for the type of property most Taiwanese will never afford.

The sight of homeless people holding placards for elite properties at street corners is becoming increasingly common in Taiwan's capital, providing a harsh illustration of the island's gap between the haves and have nots.

The 51-year-old former taxi driver, who became homeless a decade ago, is among the growing number of victims of a struggling economy, many of whom have been forced out of their homes after losing their jobs.

While the luxury apartment Liao advertises is expected to sell for more than Tw$100 million (US$3.33 million), property prices in general are beyond reach for many regular salary-earners with an average monthly income of less than Tw$40,000.

For the likes of Liao, even renting a room is out of the question.

"I can't even afford to pay the rent since I lost my job 10 years ago. I've only saved Tw$4,000 from doing odd jobs all these years which is not enough to rent a small room for one month," said Liao.

In recent years the gap between the rich and poor has widened rapidly, reaching a record level in 2011 as the wealthiest families earned 96 times more than the poorest.

It has coincided with a slowing economy, partly driven by the relocation of manufacturing industries to cheaper foreign countries such as China and Vietnam, resulting in the loss of tens of thousands of blue-collar jobs.

This has been compounded by limited retraining opportunities and a low minimum wage of less than Tw$20,000 per month, said Lin Wan-i, a professor at National Taiwan University's Department of Social Work.

Low taxes have meanwhile benefited the wealthy while limiting the amount of revenue available for the government to spend on social security, said Lin.

Social workers say the chances of Taiwan's homeless getting back on their feet are slim, given the competition for long-hour, low-paying temporary jobs.

"There is competition with young people or housewives even for a temporary placard-holding job."

The bottom five percent of families reported an average annual income of Tw$48,000 ($1,600), compared with Tw$4.63 million earned by the top five percent in 2011, based on income tax filings.

Taiwan has made efforts to address wealth inequality, while initiating plans to rein in soaring property prices and hike taxes for the wealthy, which has helped narrow the gap between rich and poor since the 2011 record.

But the plight of the underclass is becoming an increasingly frequent theme in the media, including the recent story of an eight-year-old living in a graveyard with her cash-strapped parents for over a year after they were kicked out by their landlord. Social workers eventually intervened.

Observers have cited the wealth gap as a factor driving recent anti-government protests that occupied the parliament's main chamber earlier this year.

Taiwan has moved to levy a so-called "rich man's tax" on nearly 10,000 of the island's wealthiest people in a bid to narrow the income gap and ease growing public anger. The proposal passed an initial screening in parliament earlier this month.

However, Prof Lin warned that income disparity would widen further.

"The gap will continue as the next generations inherit wealth while the poor have little chance to turn their situations around with less money for their children."

'Each day at a time'

The private Grace Home Church currently runs 27 centers across Taiwan serving two free meals a day for six days a week to up to 2,000 homeless and disadvantaged people, according to Pastor David Lee.

"There are more and more people coming to our centers these days. We hope they can have enough to eat and some peace of mind here before they can think of the next step in their lives."

A decade ago the church ran one facility serving just 80 people and it now plans to open more than 30 new centers to meet growing demand, Lee said.

Huang Ding-hsin, a 65-year-old estranged from his family, is a newcomer to the streets in Taipei's Wanhua district where hundreds of homeless people gather. He lost his job due to an eye ailment several months ago.

"I can only get by each day at a time and do any work I can find while I still have strength," he said.

"I buy lottery tickets with the little money I make, as it's my only hope to ever have a roof over my head again," Huang added, lining up with 60 other people for free lunch boxes given by a charity. AFP