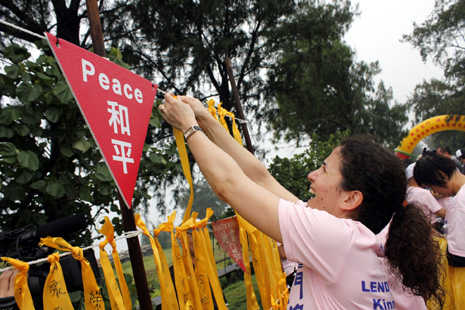 Sylvie Brigot, executive director of ICBL, at a hike to promote peace in Taiwan

Taiwan will complete clearance of its landmines this month as scheduled, a defense official said on Friday. But it is refusing international requests to destroy its mine stockpile, citing continued threats from China.

Nearly 110,000 landmines and unexploded ordnance have been cleared by Taiwan. Most were planted on the Kinmen and Matsu Islands, close to the Chinese mainland, by the Kuomintang (Nationalist) Party, who retreated to Taiwan when Mao seized power on the mainland in 1949.

The two islands ceased to be regarded as frontline battlefields in 1992, and with only one area left for clearance, the entire task is expected to be completed this month.

Taiwan is not a signatory to the international Mine Ban Treaty but it did enact the Antipersonnel Landmine Control Act on June 14, 2006, which required the government to clear all landmines within seven years but allows it to retain the right to use landmines.

An eight-member delegation of the International Campaign to Ban Landmines (ICBL) is visiting Taiwan to join activities to mark the occasion. ICBL executive director Sylvie Brigot Vilain called on the Taiwan government to introduce a local law that mirrors the treaty, prohibiting the use, stockpiling, production and transfer of antipersonnel mines and calling for their destruction.

But Vice-Defense Minister Liao Jung-hsing said in response that, “Taiwan has no rush to do so as big powers like Russia and mainland China have not signed the treaty.

“Although sincerity has shown in cross-straits exchanges, Taiwan and mainland China are still in enemy status and thus we cannot relax on military preparation,” he said.

He noted however that there has been a continual budgetary allocation for destroying weapons since 2007. Liao refused to disclose the time and amount being destroyed, claiming it is a military secret.

Taiwan suspended the use of antipersonnel mines after 1958, and has spent NT$140 million (US$4.69 million) on landmine clearance so far.

A spokesperson of the Eden Foundation, a local member of the ICBL, said that 161 countries have agreed to ban landmines.

According to the UN 15,000-20,000 people are killed each year by landmines, most of them women, children and the elderly.

The latest landmine monitoring report showed that 65 countries and regions around the world still planted landmines as of 2011.