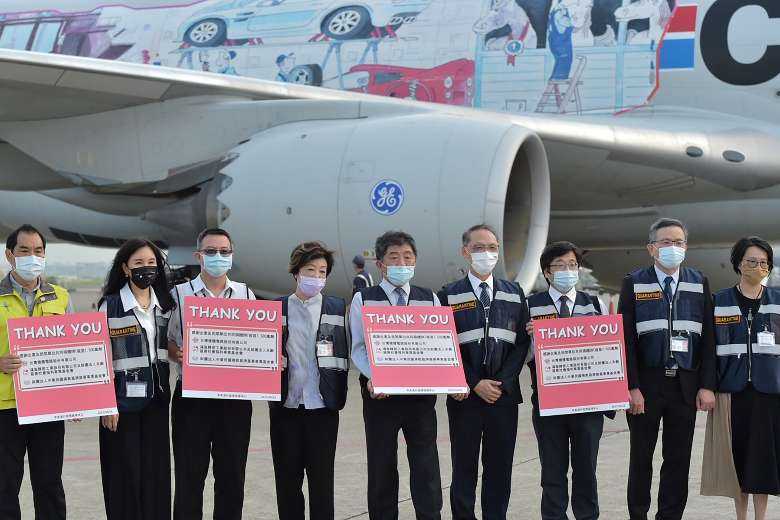 Taiwan's Health Minister Chen Shih-Chung (center) with officials as they receive a shipment of the Pfizer Covid-19 vaccine at Taoyuan International Airport near Taipei on Sept. 2. (Photo: AFP)

Taiwan has received its first batch of Pfizer-BioNTech coronavirus vaccines in a delivery organised by two tech giants and a charity because of diplomatic pressure from China.

The 930,000 doses that arrived on Sept. 2 are the first of 15 million jabs acquired by Foxconn and Taiwan Semiconductor Manufacturing Company (TSMC), as well as Buddhist charity Tzu Chi foundation, in deals with a China-based distributor after months of wrangling.

Despite donations of several million doses from the United States and Japan in June, Taiwan has been struggling to secure enough vaccines for its 23.5 million population and its precarious political status has been a major stumbling block.

As Taipei and Beijing accused each other of hampering vaccine deals, the companies stepped in with a face-saving solution: buying the Pfizer-BioNTech doses from Chinese distributor Fosun Pharma and donating them to Taiwan.

Health Minister Chen Shih-chung, who was at the airport to receive the shipment, thanked the donors for "working very hard to overcome all difficulties" to help acquire the vaccines.

TSMC charity foundation chairwoman Sophie Chang also noted there were "many difficulties" in the process.

Taipei had tried to secure Pfizer-BioNTech jabs from Germany but hit a roadblock: Shanghai-based Fosun has the distribution rights for China, Hong Kong, Macau and Taiwan.

Attempts to sign a direct deal made little headway, with Taiwan blaming Beijing. In return, Beijing accused Taiwan of refusing to deal with Fosun Pharma and politicising its vaccine search.

Beijing's authoritarian leadership views democratic self-ruled Taiwan as part of China's territory and has vowed to one day seize the island, by force if needed.

China tries to keep Taiwan internationally isolated, including blocking it from the World Health Organization.

Taiwan was hailed for keeping Covid-19 at bay for the first year of the pandemic. But an outbreak detected in April forced the island to implement economically painful social-distancing measures.

In recent months, case numbers have fallen dramatically and restrictions have eased. A previously lacklustre vaccination campaign has also picked up.

Around 43 percent of Taiwan's people have had at least one dose so far, according to the health ministry.

Until now, the island had acquired AstraZeneca and Moderna jabs.