Taiwan’s President Tsai Ing-wen has written to Pope Francis to complain about China’s persecution of religion, saying that Beijing aims to threaten its democracy and freedom.

Taiwan has been concerned by the Vatican’s moves to normalize ties with China, especially after a landmark September 2018 provisional deal on appointing bishops.

Tsai won re-election by a landslide on Jan. 11 after a campaign pledge to protect Taiwan’s sovereignty from Chinese control.

In her letter to the pope, released by the Presidential Office on Jan. 21, she listed Chinese actions that she said constitute abuses of power, including violence toward Hong Kong protesters and persecution of religious believers seeking to follow their faith.

Responding to a message from Pope Francis for World Day of Peace on Jan. 1, Tsai wrote that Taiwan hopes for a peaceful resolution of its differences with China.

“However, at present dialogue across the Taiwan Strait is filled with difficulties,” she wrote. “The main sticking point is that China has so far been unwilling to let go of its desire to control Taiwan. It continues to threaten Taiwan’s democratic freedoms and human rights by threatening to use force against Taiwan, fake news, cyberattacks and diplomatic means.”

Tsai quoted directly from the pope’s peace message, which said: “War is fueled by a perversion of relationships, by hegemonic ambitions, by abuses of power, by fear of others and by seeing diversity as an obstacle.”

“Authorities dispatching armed police to fire tear gas and suppress and arrest people expressing the wish to pursue democracy and human rights; internet celebrities or athletes being threatened with termination of contracts or bans from competitions when they speak up in defense of freedom of speech; religious practitioners facing detention and persecution by public security officers when they, following their conscience, refuse to be coerced into signing documents to join an organization that violates their religious doctrines — all these constitute what you refer to in your message as abuses of power and reflect the notion of diversity as an obstacle. Indeed, they only serve to fuel conflict,” she wrote.

“I strongly identify with Your Holiness's magnanimous vision and appeal to all of humanity to renounce the desire to dominate others, show mutual respect, and learn to see one another as sons and daughters of God and as brothers and sisters, so as to break the spiral of vengeance.

“Many of the international conflicts today can be attributed to the desire to dominate others. When one party tries to impose its will on another, genuine dialogue becomes impossible.” 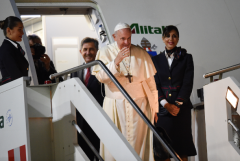 Yet despite China’s “severe suppression,” Taiwan is moving forward, cooperating with friendly and similar-minded countries so that other democracies recognize it as the best partner for maintaining peace and stability, she said.

Beijing ended diplomatic ties with the Vatican in 1951 and is concerned that an independent church in China could threaten its authority.

The 2018 deal gives the Vatican a long-sought say in the choice of Chinese bishops, previously solely appointed by Beijing. Conservative Catholics have opposed the deal.

Tsai expressed her hope for the continued growth of the Catholic Church and said that the virtue of hope leads toward peace and overcoming adversity.

“I firmly believe that as long as people in Taiwan and around the world embrace hope and remain open to a dialogue that rejects exclusion and manipulation, true peace can be achieved,” Tsai wrote.

The Vatican is one of only 15 states that has diplomatic ties with Taiwan and the only one in Europe.

Beijing has consistently demanded that other nations end diplomatic recognition of Taiwan, which it regards as a rebel province, as a price for increased economic or political cooperation.

Taiwan’s government has repeatedly invited Pope Francis to visit Taiwan both before and after the deal on appointing bishops with China.