President Tsai Ing-wen has confirmed a small number of US troops are present in Taiwan to help with training, adding she had "faith" that the American military would defend the island in the event of a Chinese attack.

The remarks sparked a strident, albeit familiar, rebuke today from China, which accused the US of trying to "stir up trouble" and that it "firmly opposes" any official or military contacts between Taipei and Washington.

In an interview with CNN, Tsai described Taiwan as a regional "beacon" of democracy that is facing down a giant authoritarian neighbour as the threat from Beijing grew "every day".

The presence of US troops was first confirmed to AFP and other media by a Pentagon official earlier this month.

Tsai's comments are the first time a Taiwanese leader has publicly made such an admission since the last US garrison left in 1979 when Washington switched diplomatic recognition to Beijing.

Asked how many US troops were in Taiwan, she replied "not as many as people thought".

Authoritarian China regards self-ruled Taiwan as its own territory and has vowed to one day seize the island, by force if needed

"We have a wide range of cooperation with the US aiming at increasing our defense capability," she added.

When asked if she was confident that the United States would help defend Taiwan if necessary against China, Tsai replied: "I do have faith."

Speaking to lawmakers today, Taiwan's Defense Minister Chiu Kuo-cheng said US and Taiwanese troops have long had contacts with each other.

"We have personnel exchanges and they (US soldiers) would be here for military cooperation, but this is different, according to my definition, from having 'troops stationed' here," Chiu said. Vatican-China deal is a long way off, if it's even done at all 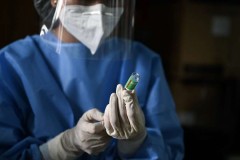 Authoritarian China regards self-ruled Taiwan as its own territory and has vowed to one day seize the island, by force if needed.

Beijing's sabre rattling has ramped up in recent years, exacerbating fears the island of 23 million people could become a major global flashpoint.

China's ultra-nationalist state-run Global Times newspaper published an editorial today that said "the fact that US troops are stationed in Taiwan has crossed the bottom line".

US President Joe Biden yesterday rebuked Beijing at a virtual summit over its actions near Taiwan.

At the East Asia summit, attended by Chinese Premier Li Keqiang, Biden said the US was "deeply concerned by China's coercive and proactive actions ... across the Taiwan Strait".

Such actions "threaten regional peace and stability," Biden told the closed-door session, according to a recording of his remarks obtained by AFP.

Biden last week told a televised forum the US was ready to defend Taiwan from any Chinese invasion.

The White House quickly walked back those comments amid warnings from Beijing, continuing a strategy of ambiguity on whether it would intervene militarily if China attacked.

While the US switched diplomatic recognition to Beijing, it opposes any forced change to Taiwan's status. A decades-old act of Congress also obligates the US to help maintain Taiwan's defensive capabilities.

Beijing has cut formal ties and ramped up diplomatic, economic and military pressure on Taiwan because Tsai does not regard the island as part of a "one China".

During the CNN interview, Tsai reiterated her offer of talks with Xi to "reduce misunderstanding" and address the differences in their political systems — something Beijing has so far rebuffed.

Defending Taiwan from China has become a rare bipartisan issue in Washington — and there is growing support for the island in parts of Europe.

Taiwanese Foreign Minister Joseph Wu is visiting both the Czech Republic and Slovakia this week at the invitation of local politicians, a trip Beijing has criticised. He is due to travel to Rome this weekend. Politico reported he also planned to make a stop in Brussels.