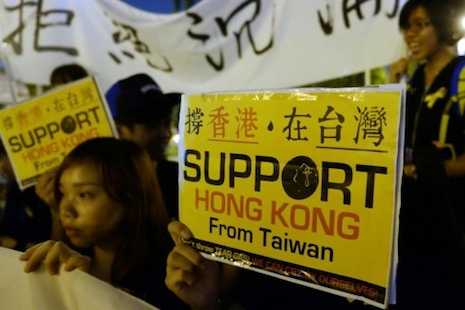 Students from Taiwan and Hong Kong display placards in front of the Freedom Square during a gathering in support of Hong Kong's pro-democracy protestors, in Taipei on October 1 (AFP Photo/Sam Yeh)

President Xi Jinping on Saturday delivered the boldest and most self-confident speech of any Communist Chinese leader to date. In noting the “growing trend towards a multipolar world”, Xi issued a reminder that the most populous country was no longer far behind the most powerful: the United States.

China is now equipped to steer world crises to its advantage, he said, advocating peaceful resolutions to global problems. This carefully crafted refrain is designed to counter the militaristic foreign policy of the US while also attempting to reassure skeptics who typically frame China in terms of its regular use of force against its own people, medieval approach on human rights and lack of political choice.

“We should increase China’s soft power, give a good Chinese narrative, and better communicate China’s message to the world,” Xi told Communist Party leaders and the wider Chinese public during a speech in Beijing aired on national television.

But within hours of his landmark address, Hong Kong and Taiwan issued another reminder that China’s rise on the world stage is being undermined by long-running — yet growing — resistance closer to home.

Also on Saturday night, Taiwanese Prime Minister Jiang Yi-huah resigned closely followed by his entire Cabinet after the pro-China Kuomintang (KMT) party lost local elections in a landslide after years of implementing policies that built closer ties to the mainland. On Sunday night in Hong Kong, demonstrators clashed with police, offering a stark reminder that pro-democracy demonstrations opposing Beijing’s blueprint for the territory’s political future post-2017 are far from over despite efforts last week by authorities to clear the rally sites.

The blow to Chinese hopes in Taiwan was significant. The KMT, which has brought Taiwan closer to China than at any other time since the two split following the end of the civil war in 1949, claimed just six of 22 seats across the country. With President Ma Ying-jeou tipped to resign, the election looks like a defiant referendum on Ma’s policies with China, which he appeared to acknowledge.

“I’ve received the message people have sent via these elections. It’s my responsibility and I will quickly offer a party reform plan to address everyone’s demands. I won’t avoid responsibility,” he told reporters after the election results were announced.

With a presidential election due in just over a year, the KMT looks in danger of losing control of the government and will remain largely powerless in the meantime with the result that other agreements under discussion designed to further bind Taiwan to China will almost certainly stall. The main opposition Democratic Development Party — the primary critic of KMT policies towards the mainland — won 13 of 22 seats and looks ascendant again.

For Beijing, perhaps the most worrying part of events in Taiwan and Hong Kong is that despite pouring considerable energy and financial resources into trying to control and influence these territories, it is failing to get its way.

Through organizations like the United Front, a mainland body designed to reunite Greater China by softening opposition to the Communist Party, China has spent heavily on charm offenses that bring Taiwanese kids on discover-your-roots tours and golf trips for influential Taiwanese.

Like in Hong Kong — and indeed China proper — the Communist Party’s approach to Taiwan has been to use economics and the lure of money to mask the political realities of a party whose only choice it offers is itself.

Among older people in Hong Kong who favor stability and opportunities to make wealth and in Taiwan where many were born on the mainland, China has found some success. But among younger people in Hong Kong and Taiwan, there are growing signs that the Communist Party’s pacifying, economics-based approach is failing, and indeed across both territories resistance is uniting.

Taiwanese students who took over the legislature earlier this year to oppose the latest bill promoting Taiwan-China economic ties and those that have led protests in Hong Kong since September say they have exchanged visits and learned from each other.

The other worrying sign for Beijing is that young Taiwanese have sympathized with protesters in Hong Kong, spurring them into action at home.

After newly elected independent Ko Wen-je was voted in as mayor of Taipei at the weekend, he noted that a recruitment drive for crucial vote-counters ultimately succeeded after his team posted notices at Taiwan National University. Ko said he believes students sympathetic to the pro-democracy leaders in Hong Kong had helped his cause.

“We feel there were mutual influences between Taipei and Hong Kong students,” he was quoted as saying by the Taipei Times.

In Taiwan, there is perhaps as much chance of China regaining sovereignty any time soon as there is of pro-democracy demonstrators winning Hong Kong residents the right to nominate candidates for the top political post in the territory after 2017. Ultimately, the end results in each case will hardly be altered by recent events. But Hong Kong and Taiwan do have a bearing on China’s rise.

Both will surely keep the Communist Party occupied right on its doorstep for many years to come, contributing to the ring of crises and resistance movements alongside those in Xinjiang and Tibet, as well as those involving countries threatened by Beijing’s aggressive South China Sea policy, notably Vietnam and the Philippines.

Hong Kong and Taiwan also serve as a reminder that if such strong resistance to China exists among people that are essentially Chinese, then the Communist Party’s rise will face continued formidable resistance further afield.

There is no doubt that China is gaining on the United States. Xi is right about that. But his dream of true super-power status faces the formidable hurdle of too many people and places resisting China’s authoritarian ascendancy. All the assurances in the world cannot change that fact.