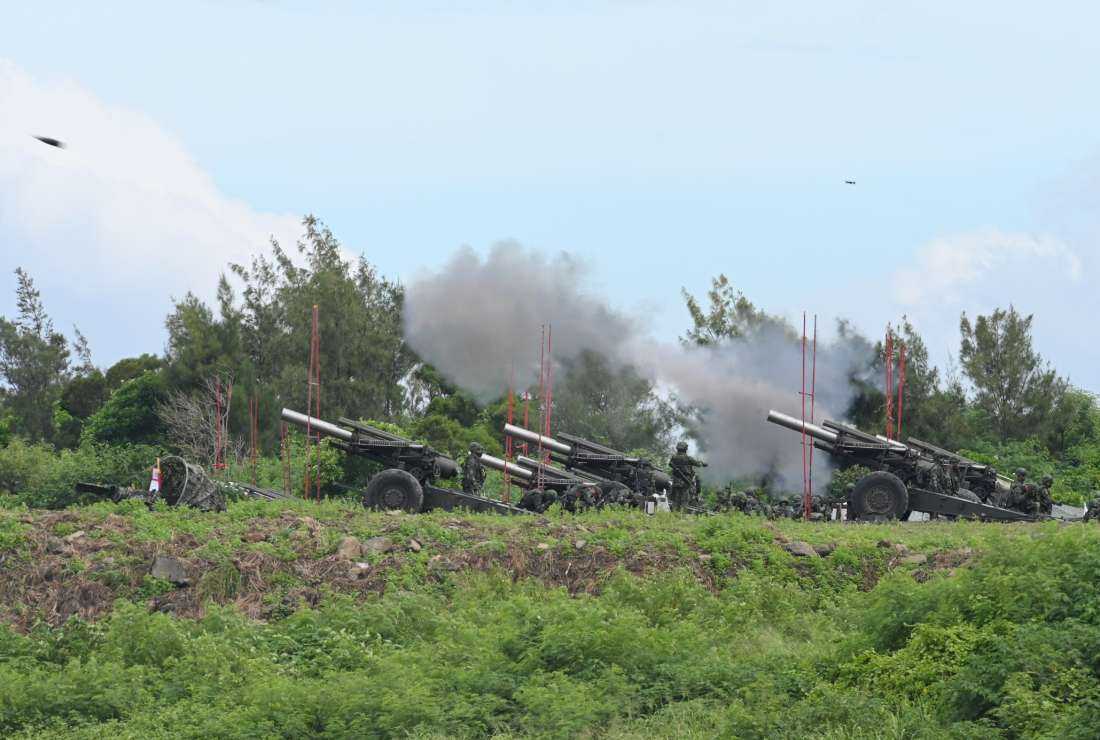 Taiwan held an artillery drill Tuesday simulating a defense against an attack as its top diplomat accused Beijing of preparing to invade the island after days of massive Chinese war games.

China launched its largest-ever air and sea exercises around Taiwan last week in a furious response to a visit by US House Speaker Nancy Pelosi, the highest-ranking American official to visit the self-ruled island in decades.

Taiwan lives under the constant threat of invasion by China, which views its neighbor as part of Chinese territory to be seized one day, by force if necessary.

"China has used the drills and its military playbook to prepare for the invasion of Taiwan," Joseph Wu told a press conference in Taipei on Tuesday, accusing Beijing of using Pelosi's visit as a pretext for military action.

"China's real intention is to alter the status quo in the Taiwan Strait and entire region," he said.

Taipei's drill started in the southern county of Pingtung shortly after 0040 GMT with the firing of target flares and artillery, ending just under an hour later at 0130 GMT, said Lou Woei-jye, spokesman for Taiwan's Eighth Army Corps.

Soldiers fired from howitzers tucked into the coast, hidden from view of the road that leads to popular beach destination Kenting.

The drills, which will also take place Thursday, included the deployment of hundreds of troops and about 40 howitzers, the army said.

On Monday, Lou told AFP the drills had been scheduled previously and were not in response to China's exercises.

The island routinely stages military drills simulating defence against a Chinese invasion, and last month practised repelling attacks from the sea in a "joint interception operation" as part of its largest annual exercises.

The anti-landing exercises come after China extended its own joint sea and air drills around Taiwan on Monday, but Washington said it did not expect an escalation from Beijing.

"I'm not worried, but I'm concerned they're moving as much as they are. But I don't think they're going to do anything more than they are," Biden told reporters at Dover Air Force Base.

China has not confirmed if its drills in the Taiwan Strait will continue Tuesday.

But Taiwanese foreign minister Joseph Wu condemned Beijing for extending its military exercises around the island, accusing them of trying to control the Taiwan Strait and waters in the wider Asia-Pacific region.

"It is conducting large-scale military exercises and missile launches, as well as cyber-attacks, a disinformation campaign and economic coercion in order to weaken public morale in Taiwan," he said.

Wu went on to thank Western allies, including the US after Pelosi's visit, for standing up to China.

"It also sends a clear message to the world that democracy will not bow to the intimidation of authoritarianism," he said.

Taiwan has insisted that no Chinese warplanes or ships entered its territorial waters -- within 12 nautical miles of land -- during Beijing's drills.

The Chinese military, however, released a video last week of an air force pilot filming the island's coastline and mountains from his cockpit, showing how close it had come to Taiwan's shores.

Its ships and planes have also regularly crossed the median line -- an unofficial demarcation between China and Taiwan that the former does not recognise -- since drills began last week.

Ballistic missiles were fired over Taiwan's capital, Taipei, during the exercises last week, according to Chinese state media.

On Tuesday, the Chinese military released more details about the anti-submarine drills it had conducted a day earlier around the island.

The People's Liberation Army's Eastern Theater command said the exercises were aimed at enhancing the ability of air and sea units to work together while hunting submarines.

It said maritime patrol aircraft, fighter jets, helicopters and a destroyer practiced locating and attacking targets in the waters off Taiwan.

The scale and intensity of China's drills -- as well as its withdrawal from key talks on climate and defence -- have triggered outrage in the United States and other democracies.

The drills have also shown how an increasingly emboldened Chinese military could carry out a gruelling blockade of the island, experts say.

But Beijing on Monday defended its behaviour as "firm, forceful and appropriate" to American provocation.

"(We) are only issuing a warning to the perpetrators," foreign ministry spokesman Wang Wenbin told a regular briefing, promising China would "firmly smash the Taiwan authorities' illusion of gaining independence through the US".

"We urge the US to do some earnest reflection, and immediately correct its mistakes."