Chen may help raise the church's profile on the island, Catholics say 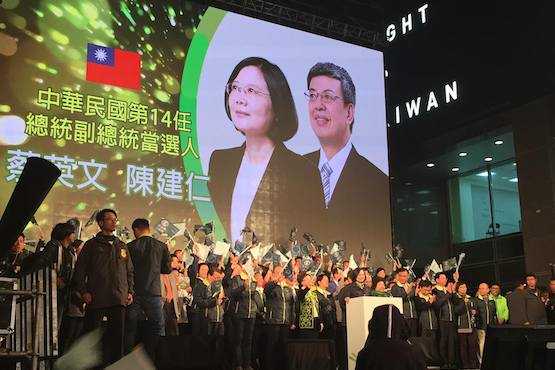 Large projector screen shows the image of Tsai Ing-wen and Chen Chien-jen, who were elected president and vice president of Taiwan on Jan. 16.

Chen, eminent epidemiologist, ran with Tsai Ing-wen of the Democratic Progressive Party, who won the Jan. 16 presidential elections in a landslide.

Chen, 64, is known to be a fervent Catholic, being conferred a knight of the Order of the Holy Sepulchre in 2010 and of the Order of St. Gregory the Great in 2013 for his contributions to the church.

"This will help improve the effectiveness of the government and carry out justice so that authorities can join hands with the church in helping the marginalized and enhance social welfare," he said.

However, Paul, a Catholic consultant in Taipei, sees little function for Chen except that "more church institutes may invite him as spokesman for fundraising."

Paul said the Catholic population of 270,000 was "too small to be influential." Political parties place little importance on the church, except when it comes to diplomacy, he said.

"However, the current situation shows Taiwan has limited diplomatic space, where the church can play a role," he said.

In the lowest voter turnout in Taiwan's history, Tsai with 6.89 million supporting votes beat her major rival Eric Chu of the Kuomintang by 3 million votes.

It also witnessed the first party change in Taiwan's Parliament with the Democratic Progressive Party (DPP) winning a majority 68 seats while the Kuomintang dropped significantly from 64 to 35 seats. The remaining 10 seats went to smaller parties.

Some Kuomintang supporters did not vote and some even voted to the democrats out of disappointment to their own party, Paul said.

"Party alternation has become a norm. If the DPP is corrupted as in the past after Tsai takes office, people will vote them out next time," he said.

No matter who rules "they have to listen to the people. A top-down decision-making model is no longer acceptable," said Faustina Nuanting Huang, a researcher with the Taiwan Institute for Economic Research.