Firefighters conduct search operations after a fire tore through a building in the southern Taiwanese city of Kaohsiung on Oct. 14, killing at least 46 people and injuring dozens of others. (Photo: AFP)

A fire tore through a building in the southern Taiwanese city of Kaohsiung, killing 46 people and injuring dozens of others, officials said.

The blaze broke out in the 13-story, mixed-use building in the early hours of Oct. 14, according to officials, raging through multiple floors before firefighters finally got it under control.

"The fire caused 41 injuries and 46 deaths," Kaohsiung's fire department said in a statement.

Most of the deaths were on floors 7-11 which housed residential apartments, fire officials said. The first five floors were for commercial use but were unoccupied.

Fire chief Lee Ching-hsiu warned that more casualties were expected as some people may still be trapped in the residential part of the building.

More than 100 residents, many of them senior citizens with physical disabilities, live in the building, according to Central News Agency.

It is unclear what caused the fire. Local police are reviewing surveillance footage and said they cannot rule out human factors. 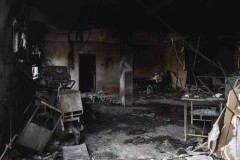