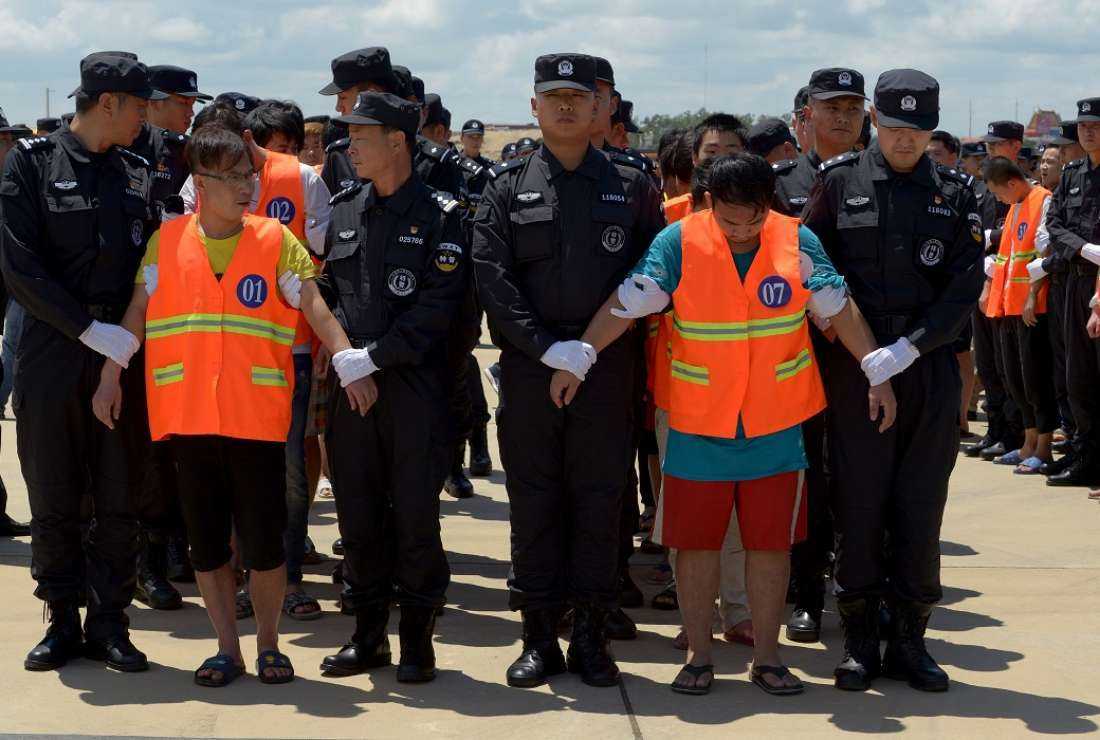 Taiwan has detained a couple for colluding with human traffickers and announced a special task force to deal with reports that “thousands of Taiwanese” were lured into Cambodia by promises of high-paid jobs but were instead forced to work for organized crime syndicates.

The bureau said the surname of the man was Tsai and his girlfriend’s surname was Tsan.

The high numbers of missing and trafficking victims follow an investigation based on flight records by the National Police Agency (NPA), which found about 1,000 Taiwanese traveled to Cambodia each month, over recent months, but only 100 on average returned home.

NPA records estimated about 2,000 Taiwanese remain human trafficking victims in Cambodia against their will but added that number could be as high as 5,000 because of blind spots in the data.

Cabinet spokesperson Lo Ping-cheng told journalists that an inter-ministerial task force had been set up by the Executive Yuan to deal with the problem while Wallace Chow, head of the Foreign Ministry's Department of East Asian and Pacific Affairs, said his ministry had received reports of similar cases since June last year.

Chow said the number of Taiwanese travelers to Cambodia from January this year has exceeded 6,400, describing this as abnormally high.

Focus Taiwan interviewed a rescued victim identified by her nickname Pipi, who was present at the news conference, and had got a high-paying job in Cambodia but after arriving she was imprisoned in a fully-fenced industrial park.

In seven days, she was resold four times but was able to escape the park after getting help from a local Cambodian provincial governor and chief secretary through an anti-fraud organization.

Another victim, a 17-year-old, has told the Taiwan News he was subjected to beatings and electric shocks for failing to comply with fraud rings.

Despite extensive coverage about trafficked foreigners by local media and repeated warnings from neighboring countries and the United States, the Cambodian government says it was “shocked” by a lowering of its human trafficking rank to Tier-3.

At a press conference held on Aug. 12, Chou Bun Eng, the permanent vice-chair of the national counter-trafficking committee, said the government was doing its best to combat the scourge and that criminals were taking advantage of loopholes to traffic people into cyber-scam operations.

“What we have seen is that even with what we have done, there have still been loopholes so that it continues to happen,” she said. “The perpetrator is not standing still, and they always keep waiting to see any holes that they can go into and do it so that we need to chase them.”

She said the government was “shocked” and repeated an earlier assertion that its downgrading to Tier-3 — the lowest rank — by the U.S. State Department “… is an injustice” and “this makes us feel disappointed. It is not suitable considering our effort.”

The US said the Cambodian government was placed on the blacklist because it did not fully meet minimum standards for the elimination of trafficking nor was it making significant efforts to do so, citing human trafficking in cyber-scams, the entertainment industry and among migrant workers.

Placement on Tier-3 allows the president to restrict aid including non-humanitarian and non-trade-related assistance, sales and financing authorized under the Arms Export Control Act, and funding for cultural and education programs.

Reports of people, all from Asian countries, being tricked, sold and forced into working online scams from compounds in the southern port city of Sihanoukville have made constant headlines in local media since April. Investment and cryptocurrency scams have been common.

Hundreds have been rescued in recent months after they were forced to work 12-hour days.

Some were beaten and tortured and sold to Cambodian-based Chinese companies. Some were ransomed for up to US$5,000 in order to leave.

Indonesia, Malaysia, Vietnam, and Thailand, almost half of the Association of Southeast Asian Nations (ASEAN), have issued warnings about cyber-scams, an almost unprecedented move given the bloc’s long history of preferring not to comment about each other’s internal affairs.

Warnings were also issued by China and Pakistan.

"We can say that two ears cannot hear everything"

However, Chou Bun Eng declined to directly address the latest reports about cyber-scam operations run out of compounds in Sihanoukville, a city with a notorious reputation for lawlessness.

“I would like to inform you that it is not that all cases were human trafficking, and we have conducted the crackdown on many cases with cooperation from relevant countries,” she said.

She also suggested that journalists — who endure a difficult relationship with the government — could do more in helping the authorities to deal with the issue.

“Brother and sister reporters, if you know any story or issue that occurs anywhere, you [should] hand the information [to us] and we will open it widely,” Chou Bun Eng told the assembled media.

“In short we can say that two ears cannot hear everything so please when there is any story, please help inform us so that we can find all means to respond.”