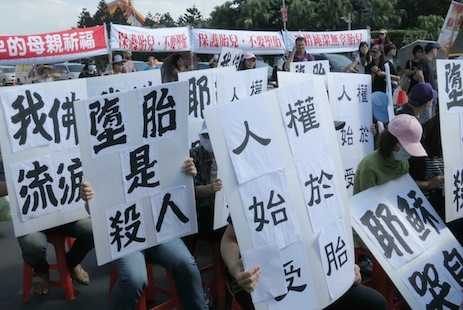 More than 1,000 Christians and Buddhists chanted “abortion is murder” and other slogans during a protest in which they prayed in front of the presidential office in Taipei yesterday.

The 'Stand for Life' campaigners also delivered a petition, demanding an amendment to a provision in the Generic Health Act which they claim has led to an increase in abortions in Taiwan.

The controversial provision stipulates that it is lawful for a pregnant woman to ask for abortion if the pregnancy or childbirth affects her mental health or family life.

Pastor Tang Chong-yong of Tainan Haian Christian Church criticized the provision for being too vague and allowing room for abuses.

The protesters are calling on the government to establish a mandatory counseling system, stipulating that the doctor and the counselor should not be the same person.

The petitioners also want a mandatory seven-day period for reflection before the abortion takes place.

Pastor Juanita Hebard, director of Ray of Hope, a home for unmarried mothers, said that in some cases when women were asked whether they want an abortion, it was “like asking them if they want a cup of coffee, as if it was nothing serious.”

Stand for Life protests have been ongoing for the past five years. This was the first time this year that they were staged in Taipei.