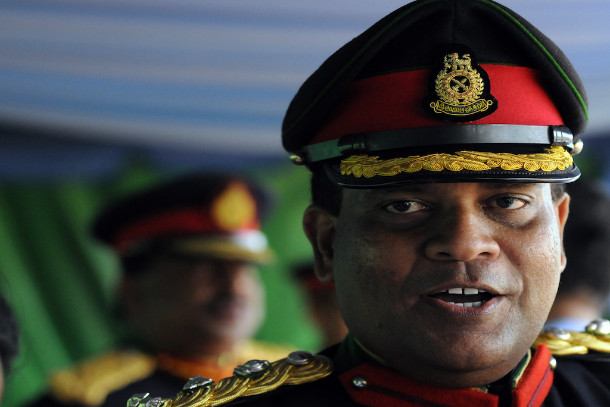 Maj. Gen. Shavendra Silva attends a military ceremony honouring 10 battlefield commanders who led the final push against the Liberation Tigers of Tamil Eelam rebels in Colombo on May 28, 2009. (Photo by Ishara Kokikara/AFP)

Share this article :
A general whose forces have been accused of war crimes has been appointed commander of Sri Lanka’s army. Maj. Gen. Shavendra Silva was promoted by President Maithripala Sirisena in a move that has alarmed human rights activists. The Office of the United Nations High Commissioner for Human Rights investigation on Sri Lanka documented laws of war violations committed by the Silva-led 58th Division in the 26-year civil war that ended in 2009. In March, Finance Minister Mangala Samaraweera supported the U.N. Human Rights Council’s extension of its 2015 resolution on Sri Lanka, Human Rights Watch reported. The extension, which Sirisena and other top officials opposed, seeks justice and accountability for violations committed during the civil war.
Related News “The sad reality is, then, that there are those who oppose any measure to achieve accountability and reconciliation because they don't want justice. They want victor's justice,” said Samaraweera at the time. Silva’s own website describes himself as a “hero” for his role in the defeat of the separatist Liberation Tigers of Tamil Eelam (Tamil Tigers). But in 2012, while he was Sri Lanka's deputy ambassador to the U.N., he was removed from the U.N. Special Advisory Group on Peace Keeping Operations due to the allegations against him. Silva has also been accused of human rights violations during security operations in southern Sri Lanka against the Sinhalese nationalist Janatha Vimukthi Peramuna armed group in the late 1980s. Michelle Bachelet, U.N. high commissioner for human rights, said she was “deeply troubled” by Silva’s appointment. The U.N. human rights investigation recommended that Sri Lanka engage in vetting to remove “alleged perpetrators” from the military. But instead of investigating Silva, the government has rewarded him with promotions. “For the relatives of victims of abuses committed by Silva’s 58th Division, who have held regular vigils seeking justice and answers, Silva’s appointment negates all the government’s pledges toward accountability, reconciliation and reform,” said Meenakshi Ganguly, South Asia director of Human Rights Watch. “Even so, the government still has international commitments. It should immediately set up a justice tribunal with international participation — or the U.N. Human Rights Council should step in and do so instead.” Amnesty International has claimed that 60,000 to 100,000 people were victims of a policy of enforced disappearance during Sri Lanka’s civil war.