Church-backed initiative could nourish hundreds of thousands in the Philippines 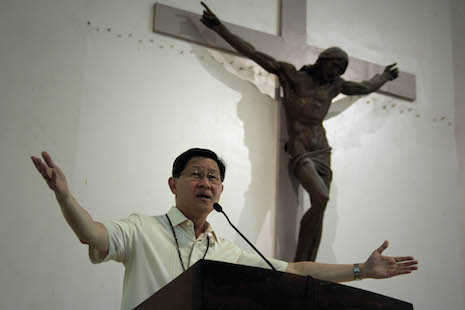 Cardinal Luis Antonio Tagle, archbishop of Manila, is urging the faithful to fast during the Lenten season in order to feed poor and malnourished children.

"If we fast and let the poor, hungry, and undernourished children benefit from it, we relive what Jesus said, 'I was hungry and you gave me something to eat," said Cardinal Tagle in a pastoral letter set to be issued on February 18, Ash Wednesday.

The prelate said the money that will be saved from fasting could be donated to the Lenten campaign "Fast2Feed" which aims to feed underprivileged children.

Fast2Feed is a fund-raising campaign for the Church's Hapag-Asa (literally "table of hope") feeding program.

Cardinal Tagle said Ash Wednesday is a reminder to everyone "to answer God’s call to pray, fast, and do acts of charity".

Last year's "Fast2Feed" campaign was able to feed 150,000 children in areas hit by Typhoon Haiyan in November 2013, said the cardinal.

Another 20,000 children also benefitted from the six-month feeding program of the Archdiocese of Manila, he added.

Since 2005, when the Church initiative began, some 1,455,735 children have been fed under the supplemental feeding project in various dioceses and schools around the country.

The project feeds children six months to 12 years old once a day, five times a week for six months.

"But our effort to help our poor, hungry and undernourished children does not stop there and has to continue," Tagle said, adding that there are millions of children who are suffering from hunger and undernourishment "and are in need of our love and assistance".

Cardinal Tagle said it only takes US$0.23 a day "to bring back a hungry and undernourished child to his healthy state in six months”.

Families in the program also receive livelihood and skills training that provides them with access to employment and income-generating activities.

A World Bank report released last month said the Philippines can eliminate poverty within a generation as sustained economic growth in recent years has translated into more jobs and higher incomes.

The report said that more than a million jobs were created between October last year and October 2013, pulling unemployment down to a 10-year low of six percent.

Real incomes of the bottom 20 percent of Filipinos also grew much faster than the rest of the population and unemployment among the poor has dropped.

However, poverty has remained at high levels in the Philippines relative to some East Asian countries, reflecting a succession of corrupt governments in past decades and the country's vulnerability to natural disasters including typhoons, the World Bank report said.