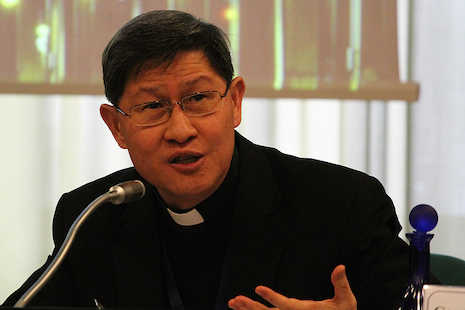 Cardinal Luis Tagle takes part in a conference at the Pontifical Council For Laity in Rome in February (Credit: Bohumil Petrik/CNA)

By Andrea Gagliarducci for CNA/EWTN News

Cardinal Luis Tagle, Archbishop of Manila, has been named the new president of Caritas Internationalis.

The general assembly of the umbrella organization of Catholic charities elected the Filipino cardinal with 91 votes out of 133.

“Thank you for your trust. I am limited in my capacities, but with all of you, with the love that Jesus has poured into our hearts and in the name of all the poor people in the world, I accept this election,” said Cardinal Tagle, speaking Thursday on the phone to delegates from over 130 member organizations of Caritas Internationalis.

Cardinal Tagle will replace Cardinal Oscar Rodriguez Maradiaga as president of Caritas Internationalis. Cardinal Rodriguez, who offered his congratulations and warm support to the new president, stepped down after serving two terms.

Caritas Internationalis is outlining and designing the goals for the next quadriennal term during this general assembly (May 12-17), whose theme is “One human family, care for creation.”

Cardinal Tagle will work in the framework of the guidelines provided by the general assembly, which granted him a wide margin over the other candidate for the presidency, Maronite Archbishop Joseph Soueif of Cyprus.

Tagle's proposed program zeroes in on advocacy for the poor and the wish to reach out to the peripheries.

He has played major roles in raising with the Philippine government various issues affecting the marginalized sector, and showed his effort in helping the Filipino population, which is continuously stricken by an average of 20 typhoons per year.

Born in Manila in 1977 and ordained a priest in 1982, Cardinal Tagle was appointed bishop of Imus in 2001. In 2011, Benedict XVI appointed him Archbishop of Manila, and created him cardinal in November 2012, during his last consistory.

*Edited for length and style