Rapid social change has left the church struggling to keep up 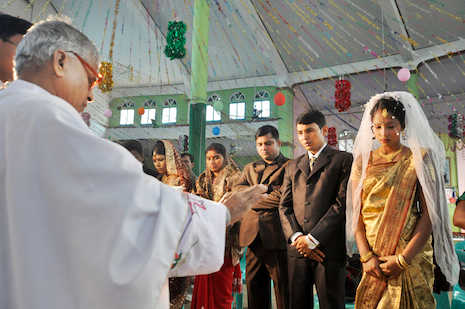 A priest blesses a Catholic couple during a wedding ceremony in Bangladesh. (Photo by Stephan Uttom)

A decade ago, Simon and Sima Gomes were introduced to each other by their parents, which subsequently led to an arranged wedding in a Catholic church in Rajshahi Diocese, in northern Bangladesh.

They were poorly matched in several ways — Simon was 12 years older and had studied up to ninth grade; Sima was an undergraduate.

"I agreed to marry him because my parents chose him, although I was unwilling to marry him at the beginning," Sima told ucanews.com.

The marriage, however, didn't last long.

Within six years, and despite having a 4-year-old boy, Sima divorced Simon.

"He didn't trust me or want me to work. He started abusing me physically and mentally, so I decided to divorce him," Sima said.

"I want to work because I want my son to become educated and have a better life than us, but he didn't think like I did.

"At first, we saw some priests and I was open to reconciliation, but it didn't work out because he refused to let me work. So, divorce was my only option."

In turn, Simon accused Sima of being unfaithful.

"She was angry when I confronted her about it and this is how the problems started," he said.

Simon, 40, now lives in Rajshahi, while Sima, 28, has settled in the southeastern port city of Chittagong. Their child lives with his grandmother in Bonpara, in northern Natore district.

Simon married again after the divorce, but his second wife left him within a year for reasons he did not wish to disclose. Sima didn't remarry after the divorce. Both have not gone to church since.

Simon and Sima's story is not uncommon in Bangladesh, where changing socioeconomic landscapes are affecting family life in a country that has a long tradition of family and marriage unity.

Recently, Pope Francis simplified the Catholic marriage annulment process and the Oct. 4-25 Synod of Bishops on the family at the Vatican is currently discussing a better pastoral approach to divorced and remarried Catholics. However, these steps are unlikely to make changes in the lives of Simon and Sima. A priest blesses rings during a Catholic wedding ceremony in Bangladesh. (Photo by Stephan Uttom)

Relationship and marriage breakdowns are not a unique problem but a global phenomenon, says Father Mintu L. Palma, a marriage expert and convener of the Family Life Commission in Dhaka Archdiocese.

"Nowadays, men and women are more educated and they earn more money. Often, there are clashes of ego or personality, sometimes a competitive attitude, which are how problems start in married life," said Father Palma.

"These are the results of educational advancement and globalization, which fuel socioeconomic changes. In the past, women were less empowered, so they tried to save a marriage despite adverse situations, but now they are conscious about their rights and protest when they are under pressure," he said.

About 7 percent of Catholic couples get divorced annually, the priest said.

"Problems in Christian marriages are less discussed and less known in Bangladesh because of the small number of Christians, but they are no less serious," he said.

Social changes due to the negatives impacts of globalization and industrialization are contributing to troubled marriages and family life, says Shah Ehsan Habib, professor of Sociology at Dhaka University.

"In urban areas, the divorce rate is rising, because money and status often clash with traditional family values. Sometimes it can be blamed on internal and external migration for jobs and education, which result in extramarital affairs. In villages, marriage breakdowns result mostly from dowry-related domestic abuse," he said.

A rising number of mixed-faith marriages among Christians is a major challenge for the church, says Father Palma.

"About 10-12 percent of Catholics marry people from other faiths and the church accepts this. Problems start when one spouse violates conditions of the marriage and tries to dominate the partner," the priest said.

"Sadly, for the church there is no effective pastoral approach for interfaith couples with marriage problems. We should have developed a way of taking care of them."

In some areas of the country, the church faces challenges since tribal Catholics traditionally just live together without a formal church wedding, according to Bishop Bejoy N. D'Cruze of Sylhet.

"Living together without a church wedding was common among some tribal groups, but is now declining. From the beginning, the church has been inclusive toward them, and allowed them to attend the liturgy although they didn't receive communion until their marriage was solemnized in the church," said Bishop D'Cruze.

The prelate also decried the lack of pastoral care for couples with troubled marriages.

"There is only one family counseling center in Dhaka where we send couples when they have problems. There should be such centers in every diocese and a better pastoral approach to dealing with marriages and the family," Bishop D'Cruze said. A Catholic man puts vermilion onto a woman's forehead, part of a traditional marriage ritual common among Christians and Hindus in Bangladesh. (Photo by Stephan Uttom)

Love, sharing and dialogue for a good married life

Nicholas, 70, and Cecilia Gomes, 64, a Catholic couple from Dhaka, have been married for 45 years and have seven sons and daughters. Love, dialogue and sharing are secrets to their long, happy married life.

"Many times we quarreled, but we forgave and reconciled every time. Our constant efforts for love, sharing and dialogue have helped us to stick together all these years," said Cecilia.

"Nowadays, people are becoming self-centered. They don't try to understand each other and don't want to compromise when there is a problem."

Jesuit Father Ignatius Gomes, chaplain of the Bangladesh chapter of Worldwide Marriage Encounter, an international Catholic pro-marriage group, said he hopes the church will come up with more relaxed rules and better pastoral guidelines, during October's synod. This will help Catholics who have divorced, remarry or face marriage problems, he said.

"Modern life comes with problems for everyone and family life is no exception," he said. "The challenges for us are to accept the realities and to take an inclusive approach, in order to help couples to live as happily as they can." 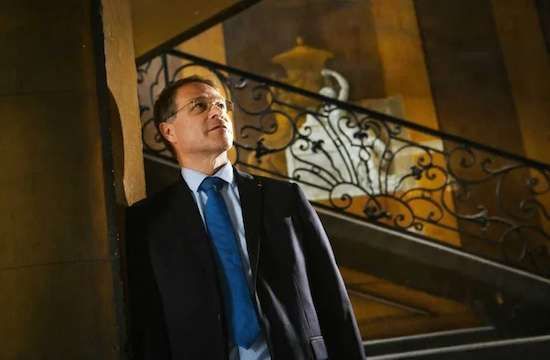