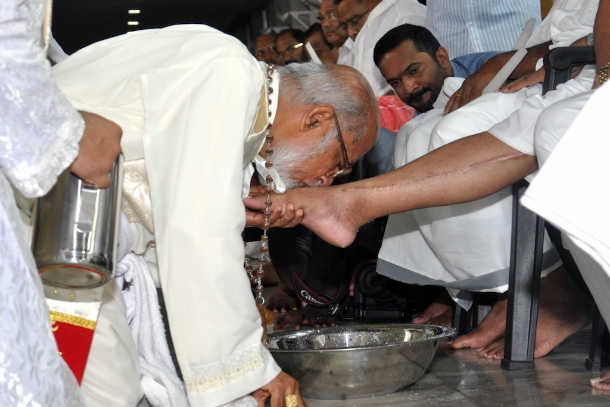 Cardinal George Alencherry, major archbishop of the Kerala-based Syro-Malabar Church, kisses the feet of a man during a Maundy Thursday service at St. Mary's Cathedral in Ernakulam in this March 2016 file picture. He and two senior priests have been accused of incurring a loss of US$10 million in a land deal. (Photo by IANS)

Two lay Catholics have been accused of defamation by the synod of India’s Syro-Malabar Church over comments about a controversial land deal and a rape allegation against a bishop.

The top decision-making body of the Eastern-rite church based in Kerala state served a defamation notice accusing them of posting falsehoods on social media with the intention of damaging the reputation of the church and its leaders.

It follows a synod decision, published in a Jan. 20 circular, to restore discipline to the church. It also warned of legal action against public statements and fake news on social media that aimed to vilify the church and its leaders.

The notice was served to Riju Kanjookkaran and Shyju Antony of an organization called Archdiocesan Movement for Transparency.

The defamatory posts and comments on social media have damaged the reputation of the church of four million Catholics, said the notice dated Jan. 24 that became public only this week.

The notice also demanded 10 million rupees (US$141,000) from each man as compensation.

Antony said they received the notice on Jan. 29 and an “appropriate reply” was given within a week.

The social media posts were “not only a glaring case of publishing false facts but also a mala fide and deliberate attempt to tarnish the character, reputation and goodwill of the church and the major archbishop of the church before the public,” said the notice.

The land controversy made headlines early last year when some priests of the Archdiocese of Ernakulam-Angamaly alleged its head and the church’s major archbishop, Cardinal George Alencherry, and two senior priests sold off land incurring a loss of some US$10 million.

In the second case, Bishop Franco Mulakkal of Jalandhar was arrested last September on charges of raping a nun when he visited her Kerala convent. The nun’s Missionaries of Jesus congregation functions under the patronage of Bishop Mulakkal, a native of Kerala.

The social media posts criticized bishops for supporting the accused prelates. One comment said that “not even animals attack their prey after hunger is satisfied” in a covert criticism of bishops blaming the nun for her complaint.

“Since the notice has been sent on behalf of the synod, we have decided to implead all bishops in the synod into the case and fight it until the end,” Antony told ucanews.com Feb. 13.

He said the notice was another attempt to silence and suppress lay people from “voicing their dissent against the excess” of the church hierarchy. “We will not succumb to such pressures from the bishops,” he said.

Kanjookkaran said the bishops “have joined to take revenge on us” for questioning an illegal land deal and creating public support for the nun who accused Bishop Mulakkal of rape.

“When they talk about the entire Syro-Malabar Church, we too are part of it and we want to know how our social media posts damaged the reputation of the church. We are determined to fight the case and make them realize they alone just don’t make the church,” Kanjookkaran told ucanews.com.

He said the bishops knew about the rape allegation at least a year before the nun contacted police. “They mishandled it. They openly supported the accused bishop. The cardinal’s involvement in the land deal was shocking,” he said.

Kanjookkaran said “these murky acts, not our posts, have brought dishonor to the entire church” and damaged the reputation of Christians across India.

Lawyer Pranoy K. Kottaram, who sent the defamation notice on behalf of the synod, refused to explain how the synod can claim to be speaking for four million church members.

He also refused to disclose the identity of the person who appointed him. “It could be one or a group of people,” he told ucanews.com.

The synod’s spokesman, Father Jimmy Poochakkatt, could not be reached for comment despite several attempts.