Syriac patriarch: 'Our martyrs are torches of faith'

Two priests were among the 48 people who were killed during the attack Oct. 31, 2010 Commemorating the 10th anniversary of the massacre by Islamic militants at Our Lady of Deliverance Church in Baghdad, Syriac Catholic Patriarch Ignace Joseph III Younan reminded the faithful that "our martyrs are the torches of faith that illuminate our paths of life and ignite in us the fire of love toward everyone."

Two priests were among the 48 people who were killed during the attack Oct. 31, 2010. The youngest victim was 3. More than 80 people were wounded.

"Many of you knew the martyrs closely: the two young priests, Father Thaer Abdal and Father Wasim Al kass Petrous, the children, the young men and women, the fathers and mothers" as they prayed and participated in the sacrifice of the Mass on the eve of All Saints' Day "when the cowardly criminals" went on a rampage, "killing relentlessly," the patriarch said in his homily.

The interior of the church, its bloodstained walls pock-marked with bullet holes, has since been renovated.

"The blood of our martyrs was mixed with the sacrifice of the lamb on the altar, and their souls ascended to the sky looking at us from its perch with tenderness, interceding with us," Patriarch Younan said.

The patriarch, who visited Baghdad from the patriarchate in Beirut, prayed that the cause for canonization for all 48 martyrs would be "completed by the competent authorities in the Holy See, so that we can return and celebrate their rite of beatification as soon as possible."

The massacre was considered "a wake-up call for Christians" that led to the displacement of the largest number of Christians in modern times, not only from Baghdad, but from all parts of Mesopotamia, Patriarch Younan said.

"No matter what injustice and calamities befall us, we will not become advocates of violence or revenge, but messengers of peace, brotherhood, and tolerance," the patriarch said.

"Our martyrs assure us, as well as their cowardly killers, that the true final victory is for good, and that our true dwelling is in heaven where there is neither crying, sadness, nor pain, but true happiness with the Lord and the Virgin 'Our Lady of Deliverance' and all the saints," Patriarch Younan assured the faithful.

RELATIONS BETWEEN CHRISTIANS AND MUSLIMS IN MIDDLE EAST 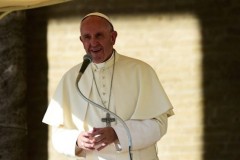 Pope Francis, IS, and the crisis of church and state