Indonesia should open an independent, impartial investigation of the Enarotali shootings 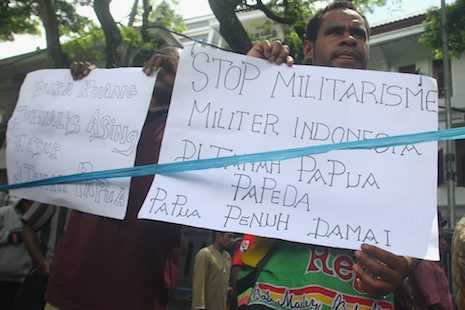 By Elaine Pearson for Jakarta Globe

Australia still mourns the death of two hostages killed last week in downtown Sydney after a horrific 16-hour siege only a few blocks from the Human Rights Watch (HRW) Australia office. Sydney police are in the midst of an exhaustive investigation, covered by local and foreign media, to determine what exactly happened and how to prevent such tragedies.

Just days before, I had been in Indonesia’s capital, Jakarta, where media reported on five peaceful protesters being shot dead in the remote town of Enarotali in Indonesia’s far eastern province of Papua. A sixth protester died two days later from gunshot wounds.

This was also a horrific and tragic loss of life, especially since four of the dead were high school students, shot down in their grey-and-white school uniforms. Five of the 17 wounded in the incident were primary school students.

Witnesses told HRW that on the morning of December 8, about 800 Papuan young men, women and school children gathered near the local police station and military command. They were demanding an explanation for the alleged beating of a 12-year-old boy the night before by a group of soldiers.

The protesters, some carrying ceremonial Papuan hunting bows that have a purely ritual function, expressed their grievance through a traditional Papuan waita dance, which involves shouting, running in circles and mimicking birdsong.

The police ordered the protesters to disperse and then struck them with batons and sticks when they refused to comply. Police and military personnel then fired live ammunition into the crowd.

The Papua police chief, Inspector General Yotje Mende, told the media that his officers were only “securing” their station because it was under attack. Police have claimed officers were acting in self-defense and suggested that unknown gunmen on a nearby mountainside had fired the shots killing the protesters.

As accounts from witnesses and the police are at odds, what is needed is for Indonesian authorities to promptly open an independent and impartial investigation.

While the Sydney siege was dominated by extensive media coverage, in Papua, no video record of the Enarotali shootings is known to exist.

Enarotali is far from the beaten path, lacking cell phone and Internet coverage. And Papua is effectively closed off to foreign journalists and human rights monitors. Official permission for such access is required, but rarely granted. Earlier this year, the authorities detained two French journalists for more than two months for allegedly violating the terms of their tourist visas by attempting to report on Papua. Security forces in Papua threaten and harass local journalists when they report on “sensitive” topics such as protests.

Papuan activists in Jakarta protesting the Enarotali killings on December 10, Human Rights Day, told me they were upset by newly elected President Joko Widodo’s deafening silence on the Papua shootings.

Marthen Goo said: “Any peaceful protest is repressed in Papua. We are sick of the violence. And if we complain, we are labeled by officials as sympathizers with OPM [the separatist Free Papua Organization]. We thought things with Jokowi [as the president is popularly known] would be different, but there’s no change.”

Almost two weeks since the Papua shootings, the president has failed to speak out about the killings. That casts doubt on his campaign promise to give “special attention” to Papua to help ease the “political tension” there.

Instead, the government persists in its near-suffocating security response to Papuan civilians’ demands for basic human rights.

Over the last three years alone, HRW has documented dozens of cases in which police, military, intelligence officers, and prison guards have used excessive force when dealing with Papuans exercising their rights to peaceful assembly and association.

Widodo plans to visit Papua by the end of the year. That trip will give him an opportunity to make good on his election promise to address the festering tensions in Papua. The president needs to reset the Indonesian government’s failed Papuan polices, and promise an independent and impartial investigation into the killings at Enarotoli and prosecutions for all those responsible for wrongdoing.

Australian Prime Minister Tony Abbott should reach out to Widodo in the spirit of two leaders grappling with lives tragically lost. Abbott should tell him to reassure Papuans that their president recognizes their lives matter, and that until all Papuans’ rights are fully respected, more grave tragedies are bound to occur.