Suu Kyi made no mention of the alleged murders, rapes and intimidation and terror campaign by Myanmar security forces Attendees hold candles and a picture of Myanmar's State Counsellor and civilian leader Aung San Suu Kyi while during the Interreligious Gathering of Prayer for Peace ceremony in Yangon on Oct. 10. (Photo by AFP)

Myanmar's leader Aung San Suu Kyi has announced the formation of a new body to deal with the Rohingya crisis as she acknowledged the international criticism her country has come under for alleged human rights abuses.

However, in a nationally televised address on Oct. 12, the state counselor once again avoided using the term Rohingya to describe the 519,000 refugees who have fled across the border over the past six weeks.

Her 10-minute address came a day after a team of United Nations investigators released a report discrediting Myanmar's account of how the crisis unfolded, saying it was "well-organized and systematic."

Myanmar has said the crackdown was launched after terrorists attacked security posts on Aug. 25 and that any deaths or injuries inflicted on Rohingya were collateral damage. But the report said the manner in which the villages, home and property of the Rohingya across northern Rakhine State was destroyed challenged the assertion that it was merely collateral damage of the military security operations following the alleged attack."

Suu Kyi said for the development of Rakhine State, from where the Rohingya fled, there needed to be multiple local and international players involved.

She said the the Union Enterprise for Humanitarian Assistance, Resettlement and Development in Rakhine would be comprised of representatives of the government, the people, local and international NGOs, UN agencies, the private sector and friendly nations working together.

"There has been a lot of criticisms against our country," Suu Kyi said, according to the Democratic Voice of Burma. "We need to understand international opinion. However, just as no one can fully understand the situation of our country the way we do, no one can desire peace and development for our country more than us."

However, Suu Kyi made no mention of the alleged murders, rapes and intimidation and terror campaign by Myanmar security forces documented in the U.N. report.

"Rather than rebutting criticisms and allegations with words, we will show the world by our actions and our deeds. In the Rakhine State, there are so many things to be done," Suu Kyi said.

While she didn't mention the Rohingya she referred to other ethnic groups such as the Rakhine, Myo, Daing-net and Hindus. 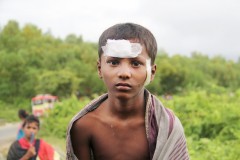 After meeting with the U.S. Ambassador to Myanmar Scot Marciel on Oct. 12, the military chief said the Bengalis, a common term used by Myanmar people to refer to the Rohingya, may feel safer at home.

"They might have fled to the other country with the same language, race and culture as theirs by assuming that they would be safe there," he said.

General Min Aung Hlaing blamed "instigation and propaganda" by the media for enflaming the issue, according to a post on his Facebook page.

He said it was "exaggeration to say that the number of Bengalis fleeing to Bangladesh is very large" and defended the military crackdown in Rakhine state as "proportionate."

Aye Lwin, a prominent Muslim leader who attended interfaith rallies in Yangon organised by Sui Kyi's National League for Democracy party, praised Suu Kyi  her commitment to the development of Rakhine and her appeal to the international community to help.

"This is a positive move and she showed her government policy of what she should do and what she needs to do as Rakhine State has been neglected for decades," said Aye Lwin who was also a member of Kofi Annan-led Rakhine Advisory Commission on Myanmar.

He told ucanews.com that Sui Kyi's pledge on providing humanitarian assistance was a positive sign as anti-NGOs sentiments were growing and there had been cases of humanitarian aid being blocked by local people.

Pe Than, a lower house Rakhine lawmaker for hard-line Buddhist party, the Arakan National, said Suu Kyi needed to provide specific details on the verification of ID process and resettlement.

Pe Than called on the government to accept input from Rakhine political parties, lawmakers and community leaders if it wanted to avoid hurdles.

Political analyst Khin Zaw Win, director of the Tampadipa Institute in Yangon, said Suu Kyi had tried to burnish her image and Myanmar's reputation but she had not gone far enough.

He said it was obvious that Myanmar has two governments, a civilian one and a military one, which spoke with different voices.

"Suu Kyi should visit Rakhine State to observe the reality and call the refugees to come back to the state. But her government might face an uphill battle on how the security forces, such as the military, border guard force and police, will collaborate with the government on the verification process," Khin Zaw Win told ucanews.com.

He also questioned how the government and military will give assurances of safety to returning refugees.

Mahfuz Parvez, a professor of political science at Chittagong University in Bangladesh, said the speech was a whitewash and Suu Kyi had maintained the brutal line taken by her government against the Rohingya.

"She is not in a position to protest against the military atrocities that has been continually going on against the Rohingya population," he told ucanews.com.

"Having millions of refugee and homeless people, how could it possible to establish peace in their land? Without repatriation and resettlement of all Rohingya people, the peace and stability in this particular region of Myanmar would be impossible."

In the Bangladesh refugee camps at Cox's Bazar there was scepticism about Suu Kyi's speech.

Noor Hashim, 35, a high school teacher from Maungdaw in Rakhine who is living in  Kutupalong camp and being treated for kidney problems, said he would only go back if  "things were normal".

"Our past experience says Suu Kyi will never stand against the military and she just delivered her speech according to military instructions, this is clear," said Noor Hashim who heads a family of five. "The Rohingya crisis can only be solved if the U.N. and Bangladesh can make strong efforts to gather international support for the Rohingya."

Muhammad Noor, 45, who has lived at Kutupalong refugee camp, since fleeing violence in 1992, noted Suu Kyi had avoided using the word Rohingya but instead  referred to other Rakhine natives.

"How can we believe that she is sympathetic towards us or she will help us get back to Rakhine again?" Noor said.

"Before the national election we fully supported her and she promised us rights and peaceful living, but what is happening now is completely different. We want to go back to Rakhine as citizens of Myanmar, as natives of Rakhine."