Myanmar’s State Counselor Aung San Suu Kyi has stressed the responsibility and duty of lawmakers to amend the constitution in a move aimed at checking the military’s political power.

“The legislative pillar is not about enacting laws for the country. Hluttaw representatives have the main responsibility and duty towards the constitution,” she said.

Her comments came after her ruling National League for Democracy (NLD) party submitted an urgent proposal for the union parliament to form a joint committee of lawmakers to implement changes to the constitution.

On Feb. 5, some 36 lawmakers from the NLD and other political parties will discuss a proposal to form a joint committee on charter change.

However, military MPs who opposed the proposal by standing in silence on Jan. 29 did not submit their names for the debate due on Feb. 5.

Military MPs, who control 25 percent of the seats in the legislature by appointment, have a key veto in blocking any proposed charter changes, especially provisions that would curb their political power.

“I have already agreed to amend the constitution. It is important to amend it systematically. We have to amend it when it is necessary,” military chief Gen. Min Aung Hlaing told reporters after a joint army, navy and air force exercise in central Myanmar on Jan. 31.

Observers believe the NLD proposal could cause tension between the military and the NLD-led government.

Pe Than, a lower house MP for the Arakan National Party in Rakhine State, said the move was an attempt to get public attention but forming a committee was not in line with the procedures of charter change. 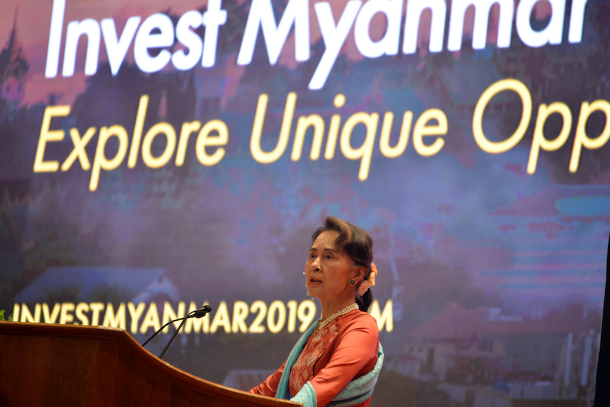 “Both the NLD-led government and the military need to negotiate as the military plays a key role in amending the constitution. It will not be possible without the consent of the military,” Pe Than, an ethnic Rakhine, told ucanews.com.

After ruling Myanmar with an iron fist for decades, the military still wields enormous power through its control of the defense, home affairs and border ministries and with a guaranteed 25 percent of seats in parliament.

Suu Kyi’s government and the military have been facing pressure from the international community over the military’s bloody crackdown that led to more than 700,000 Rohingya Muslims fleeing to Bangladesh.

The United Nations Fact Finding Mission said Myanmar’s military action was a genocidal act and called for senior military officials including Min Aung Hlaing to be prosecuted at the International Criminal Court.

On Feb. 3, thousands of monks and people joined a rally to support Myanmar’s military. Some held placards reading “We support the Tatmadaw who announced a ceasefire,” according to local media.