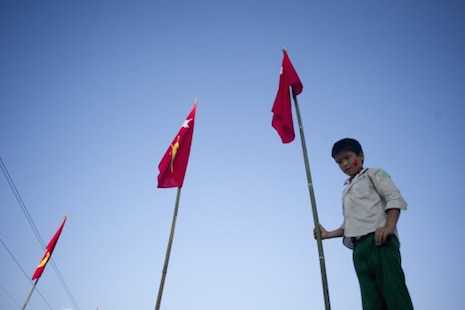 A boy stands next to political flags after attending a rally and speech by Myanmar's opposition leader, Aung San Suu Kyi, near Myitkyina, the capital of Kachin state, on Oct. 2. (Photo by Ye Aung Thu/AFP)

Myanmar's opposition leader, Aung San Suu Kyi, has reached out to Christian leaders in conflict-stricken Kachin state in a bid to win over voters critical of her silence on key issues affecting the Christian stronghold.

During a 45-minute meeting held Oct. 2 at St. Columban's Cathedral in Myitkyina Diocese, Suu Kyi addressed the importance of unity, collaborating for the future of the country, and the long-delayed national peace process.

"Suu Kyi wants [to be] all inclusive for the change of the country," said Bishop Francis Daw Tang of Myitkyina, who attended the meeting. "And I see her as a good leader as she has sacrificed for the country and she is also an international figure."

In addition to the bishop, leaders from the Kachin Baptist Church and the Myitkyina Council of Churches also attended the meeting, which was part of Suu Kyi's Oct. 2-5 campaign tour to the heavily Christian state.

The tour is part of Suu Kyi's bid to win over local voters who have often been critical of her refusal to take an anti-government stance on Naypidaw's long-running battle with ethnic Kachin rebels — a conflict that has displaced more than 100,000 people since 2011.

Ahead of Nov. 8 national elections, Suu Kyi's courting of Catholics and other Christians shows that many Myanmar politicians realize the influence faith leaders have on potential voters in remote parts of northern Myanmar, which could shape up to be a key election battleground.

During her meeting with Catholic and Christian leaders Oct. 2, Suu Kyi said she would try to address problems with the controversial Myitsone Dam project, which is wildly unpopular with many people in Kachin.

Bishop Daw Tang said he wondered how Suu Kyi's National League for Democracy would handle this and other controversial issues in the state.

"I have a concern about how the new government, whether [a National League for Democracy] government or something else, can carry out the projects that have already been contracted with links to the military, such as the Myitsone Dam project."

Myanmar's outspoken Cardinal Charles Maung Bo of Yangon has also highlighted concerns with the Chinese-funded project, encouraging voters to choose candidates and parties that "safeguard the country's nature and natural resources," in a September plea.

Critics have long accused Aung San Suu Kyi of avoiding a strong commitment to Myanmar's diverse ethnic groups that surround the more populous center of the country. In Kachin, critics say she and her party have failed to speak out about fighting in the state, which erupted in June 2011 following the breakdown of a 17-year cease fire between Myanmar's military and Kachin rebels.

Christina Kai Ra, a catechism teacher from Kachin state's Sai Taung township, attended the Oct. 2 meeting with Suu Kyi and raised the issue of the people who have been displaced by the conflict.

"We are disappointed about her silence on the Kachin conflict and her failure to visit displacement camps," she told ucanews.com Oct. 5.

She said Suu Kyi responded indirectly to her question, suggesting she sympathized with displaced people in Kachin and is willing to reach out to them.

Despite her disappointment, Kai Ra said she would likely vote for Suu Kyi's party for seats in the Upper and Lower houses in parliament, but side with ethnic Kachin candidates at state level.

Suu Kyi's National League for Democracy is contesting this year's election after boycotting the 2010 polls. However, the party won dozens of seats in 2012 by-elections.

Many observers see the November election as a test of the quasi-civilian government's commitment to political reforms. For ethnic minorities, the election could represent a major opportunity. Two-thirds of the 90 registered political parties represent minority groups from Myanmar's seven ethnic-based states.