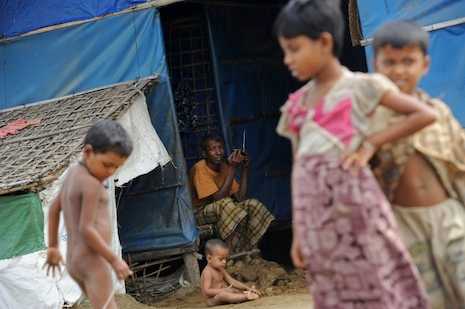 Myanmar's Aung San Suu Kyi on Monday criticised a ban on Rohingya having more than two children in strife-torn Rakhine state as counter to human rights, in rare comments on the plight of the Muslim group.

The opposition leader, who has been accused by activists of failing to speak up for the marginalised Rohingya, said she opposed the controversial rule, imposed by the previous junta and reaffirmed recently by local authorities in the wake of deadly unrest.

"It is not good to have such discrimination. And it is not in line with human rights either," the veteran democracy activist told reporters in Yangon, adding she could not confirm whether the policy was being implemented.

Rakhine authorities on Sunday said that the rule had been reaffirmed in two Muslim-majority townships in the state.

Win Myaing, spokesperson for the Rakhine government, said the order was designed to "enforce monogamy and not to have more than two children".

He said the policy had previously been put on hold because of fears over "conflicts among communities" in the state.

Up to 140,000 people, mainly Rohingya Muslims, were displaced in two waves of sectarian unrest between Buddhists and Muslims in Rakhine last year.

Human Rights Watch has accused the authorities of being a party to ethnic cleansing over the violence, which killed some 200 people and saw mobs torch whole villages.

It described the population policy as "abhorrent, inhumane" and "completely contrary to human rights".

An official commission's report in April into the unrest suggested voluntary family planning to stem a high birthrate among the Rohingya that it said stoked tensions.

Local authorities have previously been accused of trying to restrict birthrates among the Rohingya by refusing to acknowledge any more than two children per married couple, thereby denying them legal rights and access to services.

Myanmar views its population of roughly 800,000 Rohingya as illegal Bangladeshi immigrants and denies them citizenship. They are considered by the United Nations to be one of the world's most persecuted minorities. AFP