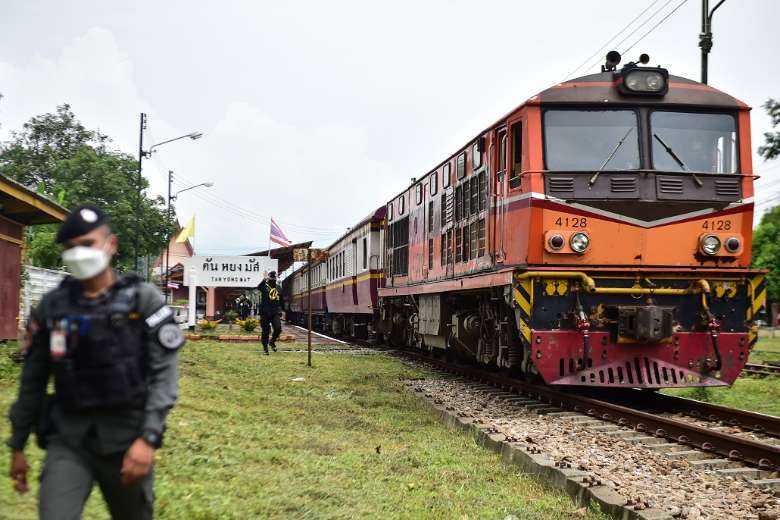 An army ranger gestures next to a train at Tanyongmat railway station in Rangae district in Thailand's southern province of Narathiwat on Aug. 28, after the train carrying agricultural products was hit by a bomb believed to have been set by suspected insurgents. (Photo: AFP)

Suspected Muslim separatists attacked a passenger train in southern Thailand, causing a temporary halt to local services during the longest-running insurgency in the predominantly Buddhist nation.

The attackers damaged the train’s airbrake system but there were no reported injuries in the Oct. 3 incident.

Local defense volunteers aboard the train returned fire and security forces were dispatched to the scene, but none of the suspected insurgents were apprehended.

In late August, a bomb was set off as a cargo train approached a railway station in Narathiwat, badly damaging the locomotive but causing no injuries.

These attacks suggest that suspected separatists are stepping up their campaign of hit-and-run attacks during a long-running insurgency that has seen well over 7,000 people, both Buddhists and Muslims, killed and thousands of others injured since its inception in 2004.

Some analysts have speculated that the recent withdrawal of US military forces from Afghanistan, which has given rise to control of the country by Islamist hardliners in the ranks of the Taliban, could re-energize Muslim separatist movements in countries such as Thailand.

“The southern tracts of Thailand, particularly in places like Pattani, Narathiwat, Yala [the three southernmost provinces] bordering Malaysia have always been in adverse light due to sporadic cases of hate and violence targeting Thai security forces,” Shantanu Mukharji, a security analyst who was a national security adviser to the prime minister of Mauritius, wrote in an op-ed earlier this month.

“The Taliban’s return to power after the 20-year war with US has boosted the morale of militants in Southeast Asia, inspiring some to make plans to go to the country and undertake military and other training, though experts say this is a difficult prospect for now amid pandemic-related travel restrictions.”

Over the nearly two decades-long insurgency, Islamic separatists have routinely targeted both security forces and civilians, including Buddhist monks, teachers and officials.

These attacks have drawn widespread condemnation from rights advocates, as have Thai security forces’ heavy-handed tactics, including suspected and reported cases of extrajudicial killings, unlawful detentions and torture.

The government of Prime Minister Prayut Chan-o-cha, a former army chief, “has followed previous Thai governments in dismissing the root causes of ethnic Malay Muslims’ grievances, specifically a lack of accountability for the government’s human rights abuses in the region,” Sunai Phasuk, a Bangkok-based senior researcher for Human Rights Watch, has noted.

“Stories of state-sponsored abuses can be heard in every Malay Muslim village across the four southern border provinces. The government’s counter-insurgency operations have countenanced extrajudicial killings, enforced disappearances, arbitrary detentions, and torture.”

The tit-for-tat violence between suspected Muslim separatists and Thai security forces continues to exacerbate a tense situation, which is why a positive outcome of peace-building measures undertaken by the government will be key to resolving the crisis, say analysists like Mukharji.

“The priority for the Thai government and southern Muslim militants should be to end the conflict that has cost almost 7,000 lives since 2004,” he said. “The longer the conflict continues, the greater the risk of increased polarization and intensified insurgency that could spread outside the south, as well as miscalculations that transnational jihadists could exploit.”