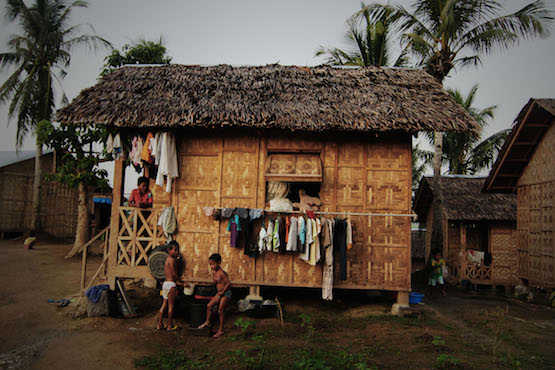 Hundreds of Filipinos who survived the devastation brought about by Super Typhoon Haiyan in 2013 still live in temporary shelters and "substandard" houses.

A congressional investigation found that of the 71,629 housing units already built by the government only about 24,000 have been occupied.

The government also failed to meet its target to build 205,125 housing units for survivors. At least US$1.4 billion has been earmarked for the resettlement of affected communities.

Lack of available land, failure to get necessary permits, and disagreements among agencies tasked to implement the projects hindered its completion.

Those able to benefit from the government's housing program complained of "substandard" quality of the houses.

The same congressional inquiry discovered in September that only US$2,300 of the allotted US$5,600 for the construction of each house was spent on construction.

The rest of the money allegedly went to the builders as commission.

Vincent Basiano from the coastal village of Anibong in Tacloban said that as much as he wanted to live in his new house "I can't because the site is not livable."

He said the new village has no proper drainage system or stable water supply. Some communities don't even have electricity.

"We rather go back to the danger zone than go to the relocation site. It's a death zone because there is no source of livelihood there," he told ucanews.com.

Jose Elmer Cajilig who leads the watchdog Movement for Change said his group would look into the reported anomalies in the rehabilitation program.

"We will work closely with the appropriate government agencies and will not stop until the root causes are uncovered and prosecuted," said Cajilig.

The mayor of Tacloban, Cristina Romualdez, said the relocation of survivors in the city was continuing.

Romualdez claimed that the local government had completed a total 10,734 housing out of 12,545 that the city aimed to build.

The mayor said the local government continues to find ways to provide a steady supply of water and electricity to the relocation sites.

Typhoon survivor Tessie Elacion has withdrawn her application for a home from the government.

"After weighing things, we decided that our family's safety is the most important factor to consider in our decision," she said.

Elacion led a group of protesters who marched in Tacloban this week to demand government action against corruption in the government's rehabilitation program.

"What the government needs to do now is to conduct a structural audit of the housing units and consult affected families," she said.

Dhon Daganasol, president of a group calling itself Justice Eastern Visayas, demanded those responsible for the anomalies be prosecuted.

Super Typhoon Haiyan hit the country in 2013 and affected 1.5 million families, 18,261 of whom lost their homes.