A week after three deadly attacks, Christians flock to Sunday services in show of solidarity and defiance 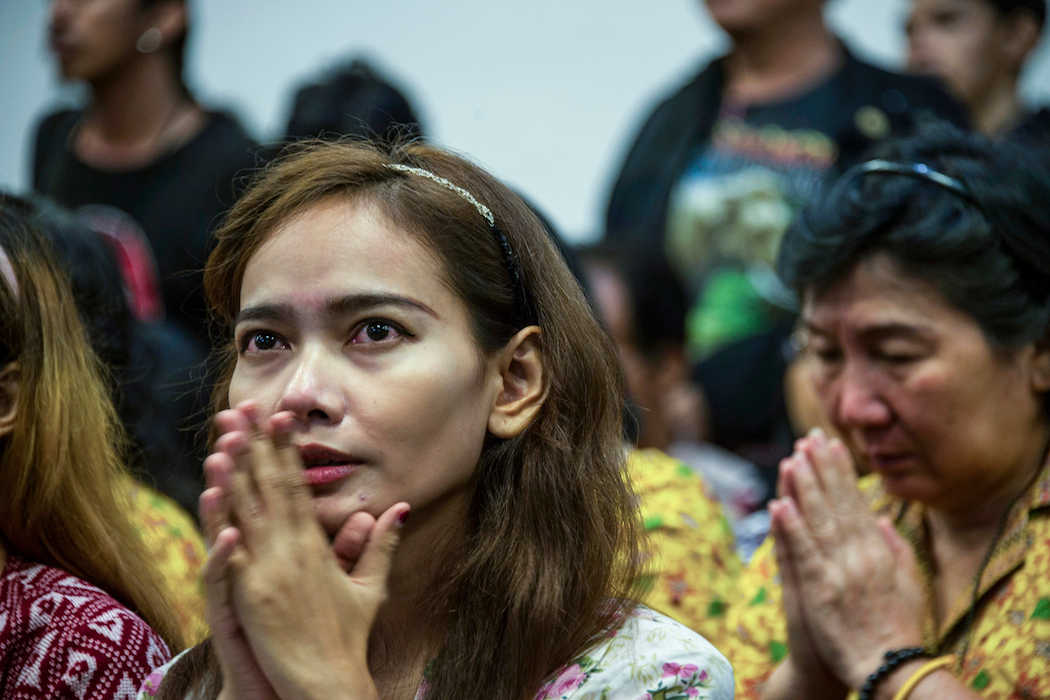 Indonesians from different religious groups take part in a joint prayer for the victims of bomb attack on churches in Surabaya on May 18. (Photo by Juni Kriswanto/AFP)

Despite tight security and fears of further deadly attacks, defiant Christians in Surabaya flocked to services and Masses on May 20 — Pentecost Sunday — according to church officials.

Christians at the Santa Maria Catholic Church and Diponegoro Indonesian Christian Church held services in their church buildings which were attacked by suicide bombers on May 13.

Meanwhile, members of the Surabaya Pentecostal Church, which suffered the most damage, held services in a large tent.

Twelve Christians were killed during the attacks, committed by members of the same Muslim family.

Church officials told ucanews.com on May 20 that Christians prayed as usual, while fully-armed police and military personnel stood guard outside.

Those entering the churches were thoroughly searched and had to pass through a metal detector.

Father Alexius Kurdo Irianto, parish priest at the Santa Maria Church, said he did not see any decline in church attendance during Mass.

Survivors, still traumatized, put their fears behind them and came and shared their experiences, he said.

"I invited the parishioners to forgive the perpetrators so the injuries, trauma and sadness suffered by victims and abandoned families could be cured," he said.

"I remembered the words of Pope Francis that forgiveness is the future and will bring healing," he said.

Desmonda Paramartha Puspitarena, 20, a university student who was injured in the attacks, shared her experience at the Mass, saying she was not afraid to return to the church.

"After what happened, I realized God really works within me," she said.

At the Diponegoro church, the congregation was greeted with banners reading "We Remain Loving" at the main gate.

"The banner was made by youth to raise the congregation's spirits. The goal is to see the fear and trauma disappear, and show that church is always open for worship," said congregation member Ivone Rewah.

Reverend Yonatan Bintoro of the Pentecostal Church said only two services were held in the tent over the weekend, but the attendance was good and that the church was looking to increase the number of services over the coming days so that it will be business as usual. He said he did not know when the damaged church would be reopened. East Java governor Soekarwo, in black shirt, along with police and military leaders visit the Santa Maria Church on May 20. (Photo supplied)

Meanwhile, support for the Christians churches continues to pour in from interfaith groups and the authorities.

East Java governor, Soekarwo, visited the three churches and the Surabaya Cathedral Church on May 20 along with police and military leaders.

During a meeting with church leaders, he asked them to continue encouraging their congregation to attend Masses and services and assured them all would be done to prevent a repeat of the May 13 attacks.

Surabaya mayor, Tri Rismaharini also visited the injured and met Muslim leaders in the city, asking them to promote tolerance and support the fight against terrorism.

Hundreds of Muslims from interfaith groups, meanwhile, descended on the Diponegoro Church on May 18 where they held an interfaith prayer service.

Yuska Harimurti, a Muslim activist who organized the event said it was an act of defiance by Surabaya citizens against terrorism and violence.

"It was also to let the survivors know that the people of Surabaya will always work together to have a harmonious life," he said.

A similar gathering was also held at Santa Maria Church.

Since the attack, police in East Java have arrested 23 suspected terrorists, while four suspects have been killed.