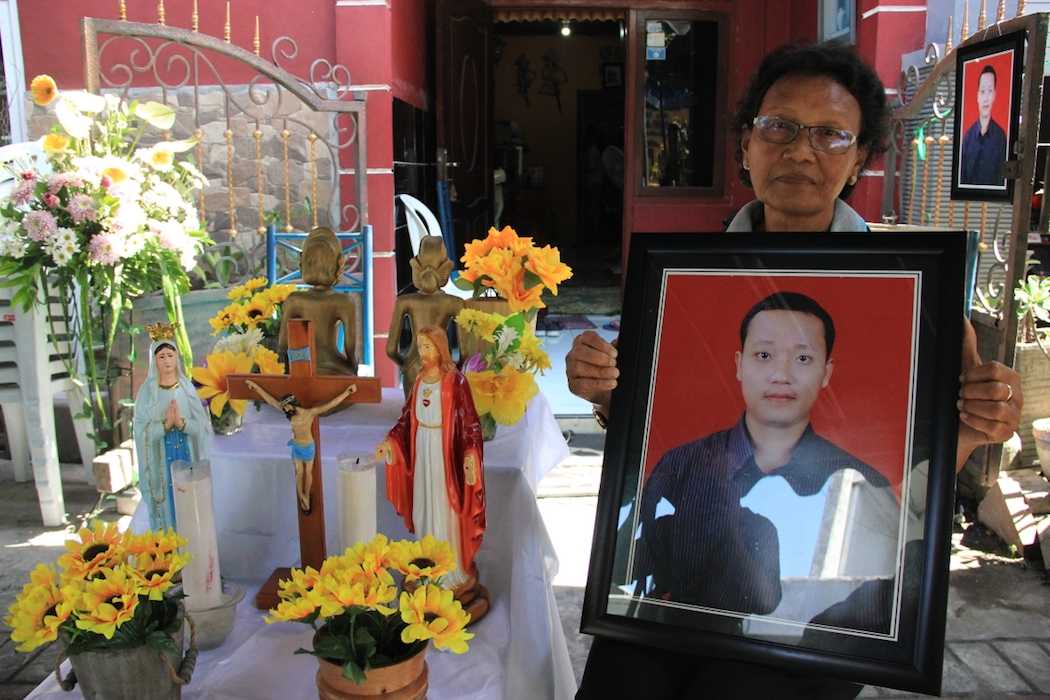 Rosalia Siswaty holds a photo of her nephew, Aloysius Bayu Rendra Wardhana, who was killed on May 13 while trying to prevent suicide bombers from entering the Santa Maria Catholic Church. (Photo by Ryan Dagur/ucanews.com)

Christians in Indonesia's second city Surabaya say the community is struggling to recover from shock and loss suffered following suicide attacks on three churches on May 13.

The attacks, carried out by members of a single family with links to the Islamic State group, initially killed 13 people and left scores injured. Some of the bombers included young children.

Another attack on police headquarters the following day by another family — including an 8-year-old girl — left at least four dead and 10 injured. Since then the death toll had risen to 25.

The Catholic-run church was the first one attacked and where at least six people lost their lives.

Despite the bombing church activities are still going as usual, including daily Mass, said Tedja.

"There has been an increase in the number of people attending Mass, because they want to pray together for the victims," he said.

Rosalia Siswaty, an aunt of Aloysius Bayu Rendra Wardhana who was killed while trying to prevent the suicide bombers from entering the church said she and her family were very proud of her nephew's actions.

"We are devastated by this incident, but we are also proud because he died saving many people," she told ucanews.com.

Josua Poli, a member of the Diponegoro Indonesian Christian Church, another target, said their congregation was still in shock following the attack, but "so far our relationship with residents in the neighborhood has been fine," he said.

Meanwhile, heavy security remains around the two churches, as well as the Surabaya Pentecostal Church, which was also attacked.

Surabaya Mayor, Tri Rismaharini ordered blanket security to ensure that "there would be no more incidents," according to public order agency spokesman Mimik Sugiono.

"We do not want to lose anymore people," he told ucanews.com.

Security has also been tightened at Protestant and Catholic schools, he added.

"We always coordinate with intelligence services and security measures are based on their information," said Sugiono, adding that at least 10 security personnel are stationed at each location.

Catholic youths have also been asked to bolster security, including at Surabaya's Cathedral of the Sacred Heart of Jesus, said Indra Tewa, a church security coordinator.

"Since the incident, every night, there are 30 Catholic youths on guard," he said.