Judges say they must examine petitions 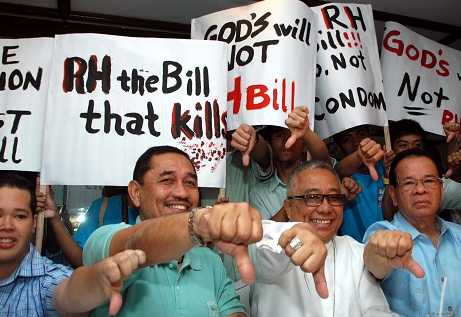 The Supreme Court on Tuesday suspended implementation of the controversial Reproductive Health (RH) Bill in a surprise move that coincided with the installation of Pope Francis in Rome.

Voting 10-5, the court issued a 120-day temporary restraining order against the implementation of the law enacted by President Benigno Aquino in December after almost 14 years of debates in Congress.

The justices, sitting en banc, said they will review a series of petitions filed against the implementation of the law on June 18.

The Department of Health had announced that the law was to take effect on March 31, Easter Sunday, after Health Secretary Enrique Ona signed implementation rules and regulations on Friday.

Ona said the law "will empower women, through informed choice and voluntarism" but Catholic leaders have criticized the law for going against Church teachings banning the use of artificial contraceptives.

The Supreme Court’s decision was condemned by supporters of the law.

“We are angered by the court decision," said Rom Dongeto, executive director of the Philippine Legislators' Committee on Population and Development.

"The court has no reason to stop the law's implementation even if the justices do have to study the petitions opposing the law," he told ucanews.com.

"It has been discussed in Congress for 14 years and all issues have been thoroughly studied," Dongeto said.

Other pro-law advocates staged a protest by lighting candles outside the Supreme Court on Tuesday.

"It makes me wonder if [the court decision] is because the Catholic Church sent holy enforcers to lean on the justices," said pro-RH advocate and author Yvette Tan.

"I imagine huge guys in monks' robes wielding flaming rosaries and knocking people unconscious with the butts of their handheld hardwood crosses," she added.

The bishop’s conference’s Episcopal Commission on Family and Life welcomed the court’s move.

The decision has given those opposed to the law, including bishops, "some respite," said commission head Fr Melvin Castro.

"It is a very temporary victory. Nonetheless, it is still a grace of God, especially that we celebrate today the solemnity of St. Joseph, the guardian of the Holy Family," Fr Castro said, referring to the feast day of the patron saint of the Universal Church.