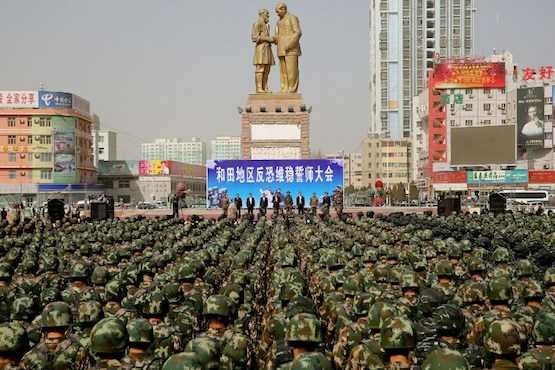 The random deadly attacks in China's northwest province of Xinjiang, often by knife by ethnic Muslim Uyghurs, that all to regularly result in retribution killings from security forces, have unfortunately started again.

It is becoming clear that more Uyghurs are being radicalized and trained overseas by groups such the so-called Islamic State, al-Qaeda and most probably more localized Southeast Asian groups.

According to experts, there are about 500 Chinese nationals fighting in Syria for Islamic militant groups.

At some point those fighters, if they are not killed, will probably join other Uyghur refugees in Turkey or in the Asia Pacific region, taking with them a more sophisticate range of deadly skills.

The Uyghurs are an ethnically Turkic race whose roots in contemporary China's west stretch back more than a millennium to the days of the Silk Road. Through history the territory itself been in and out of various Chinese dynasties.

Since coming to power in 1949, the character of the Chinese Communist Party's (CCP) rule of Xinjiang has been along the lines to what has occurred in Tibet, albeit with less international attention. The great irony of the Party's rule of these two provinces is that they are both called "autonomous regions."

In the Orwellian doublespeak of the Marxist-Leninist world that Beijing still inhabits (without any semblance of irony declaring time and again that it will not succumb to "western ideals") that means, of course, quite the opposite: both Tibetans and Uyghurs have approximately nil control over the destinies of their homelands.

As in Tibet, the Party has the medium to long-term goal of "Hanification" for Xinjiang. This means the importing of millions of Han Chinese to the region. According to official figures, the Han make up 93 percent of China's 1.4 billion people. The goal of this mass migration into Xinjiang is to repress and crush indigenous culture completely. The only element that will remain is theme park touristic elements that will keep the tills in Party controlled domestic tourism coffers ringing.

Strategically, Xinjiang is an important region to Beijing. The province borders Pakistan, Afghanistan, Russia, Mongolia and a raft of Central Asian states. It is about one sixth of China's land mass and a goldmine of resources including energy.

"Since 1949 the CCP has pursued a muscular strategy of integration defined by tight political, social and cultural control (including via Han Chinese domination of the regional government, regulation of religion and outright suppression of dissent), and encouragement of Han Chinese settlement," according to historian Michael Clarke writing for Sydney's Lowy Institute Feb 22.

"This has been coupled with a state-led economic development strategy to transform the region into a hub of Eurasian economic connectivity," Clarke wrote.

Sectarian riots broke out in the capital Urumqi between Han Chinese and Uygur mobs in July 2009. The official death toll was 196 with thousands injured. Following this, the province was cut off from the rest of the world with internet access severed for six months and armed street patrols being conducted in major cities.

Since then night markets have been closed, various restrictions placed on religion and a process of assimilation was pushed hard, including cash incentives for "mixed" marriages between Han and Uyghurs couples.

At the same time, security forces were significantly increased across the province and have continued to mount. A reoccurring campaign with the usual, subtle Party nomenclature: "Strike Hard" was launched in 2010.

Yet the efforts to crush Muslim Uyghur culture has only, according to available evidence, helped to fast track radicalization of one of the country's most repressed and marginalized peoples.

Sporadic but regular violence has arisen both within the province and in major cities around China in the years since 2009 — including a spate of attacks during 2013-2014.

Over the past year or two, things in Xinjiang have been relatively quiet until a recent spate of attacks.

Clarke also noted that in May 2015 the Chinese state media reported it had dismantled 181 "terror groups" in Xinjiang after the launch of another "strike hard" campaign in the region in March 2014 against what China projects as "the three evil forces of separatism, extremism and terrorism."

The ongoing campaign continued throughout the following year was a combination of enhanced cultural restrictions and security efforts. The conviction of 712 people in 2014 and another 1,419 in 2015 on terrorism and separatism charges were the results of such measures. The government launched additional armed patrols and checkpoints, set up community-based methods of terrorism-prevention such as neighborhood watches and "inspection of households" across Xinjiang, and offered rewards for information leading to the arrests of terrorists.

According to Xinjiang authorities, 96 percent of terror plots in the province were prevented at the planning stage.

The attacks come about six months after the appointment of the province's latest "strongman" leader, Communist Party secretary Chen Quanchuo who has embarked on a series of mass rallies by security forces intended to strike fear into the locals but which already seem to be having the opposite effect.

Still, experts have noted such overt displays are also likely linked to jostling amongst top cadres for positions in the Party's powerful 25 person Politburo which will be re-cast for the next five years at the organizations quinquennial Congress due to be held in October or November this year.