Government is reluctant to take action against the culprits, says Anglican priest 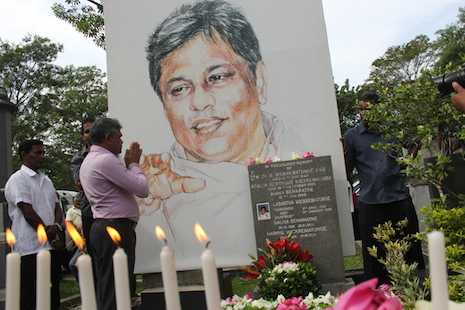 Supporters of an outspoken Sri Lankan journalist, who was murdered in 2009, have urged the government to properly investigate his death and to ensure that media is protected.

Lasantha Wickrematunge, editor of an English language weekly was shot dead by two gunmen while driving his car to work on Jan. 8, 2009.

Mandana Ismail, editor of Sunday Leader, said Wickrematunge and other journalists have been killed in Sri Lanka for writing about issues that they believed the public should know about.

"Today we are living in an environment of good governance. There is no fear of abductions. We can freely sleep at night without fear of armed thugs coming to our doors," Ismail said.

"But that alone cannot ensure media freedom. Media freedom is where a journalist has the ability to report freely, without self censorship, without any pressure on their writing," she said.

Ismail said that the authorities have little to show from their investigations into Wickrematunge's death, which have also been plagued by irregularities.

The deceased editor's wife, Raine, said she is told little about the investigation's progress.

"The police have taken such a long time with this investigation. We're wondering if somebody is dragging their feet or putting some restrictions on the investigations," she said.

Rev. Marimuthu Shakthivel said that Sri Lankan journalists did not receive any justice under the former government and that the current government has delivered little so far.

"Journalists are the watch dog of a democratic country and it seems the government is reluctant to take action against the culprits," said the Anglican priest.

A culture of impunity in Sri Lanka needs to stop he said.

"I assure that we will carry out the investigations and bring justice for Wickrematunge before next January," Karunanayake said.

Over 100 Journalists and politicians paid their respects to Wickrematunge at his gravesite in Colombo on Jan. 8. Wickrematunge was a Born Again Christian and the father of three children.