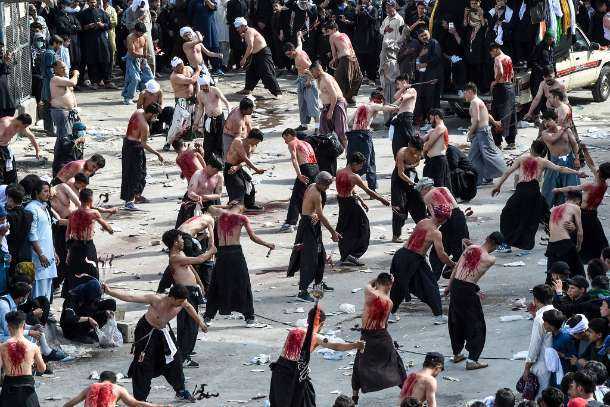 Shia Muslims flagellate themselves during an Ashura procession during the holy month of Muharram in Quetta, Pakistan, on Aug. 30. (Photo: AFP)

A newly formed coalition of Sunni groups will stage a sit-in protest in Islamabad on Sept. 14 to demand the arrest of Shia clerics and eulogists accused of blasphemy.

The demand came despite an unprecedented wave of arrests of Shias on charges of insulting the Prophet Muhammad’s companions during the recently concluded Ashura, a 10-day mourning period marked annually by the Muslim minority sect during the holy month of Muharram.

According to news reports and activists, more than 42 people, mainly Shias and Christians, have been arrested in the past month for blasphemy.

Shias, who make up 15 percent of Pakistan’s 220 million population, commemorate the seventh-century massacre of the Prophet Muhammad’s grandson Imam Husayn and his family and friends at the Battle of Karbala in Iraq for refusing to pledge allegiance to the then Muslim ruler Yazid ibn Muawiya.

Shias blame certain Islamic figures for events that led to the Karbala tragedy but the same people are revered by Sunnis for being companions of the Prophet Muhammad.

In a joint statement after the meeting, the groups condemned “insults to Prophet’s companions” during Shia majalis (processions).

The groups called for the registration of cases under terrorism laws against Shias who hold licenses for taking out Muharram processions.

They also demanded the establishment of a national commission to stop sectarianism, religious hatred and incitement.

The Sunni groups also demanded that a controversial Islam Protection Bill recently passed by the Punjab Assembly be replicated in other provinces.

Meanwhile, lawyers’ groups have voiced concern over a tweet by Prime Minister Imran Khan which appeared to criticize Shias.

“I want to thank our nation for the peaceful observing of Ashura in the country. However, unfortunately, information has come to me of elements who tried to ignite flames of sectarianism on this occasion and I will be taking very tough action against them,” Khan tweeted.

In a statement, the Pakistan Bar Council and the Supreme Court Bar Association expressed concern and dismay over Khan’s tweet “targeting a section of the Shia community and subsequent registration of cases against a number of persons of that community and their arrest being accused of blasphemy without any reason and justification. “

“The prime minister of Pakistan, being executive head of the country, is expected to play the role of a wise statesman, striking a balance among different religious sects and communities rather than to cause discrimination against a particular community/sect.

“The prime minister of Pakistan should be a symbol of unity for its citizens irrespective of religious beliefs, which in the current situation of the country is badly needed.”