From spiritual counseling to rehabilitation centers, the church's efforts are ongoing Sister Sriyani from the Congregation of the Sisters of Mercy and the Most Sacred Heart of Jesus helps drug convicts in a jail in Palembang, South Sumatra province. (Photo by Windy Subanto)

It's been 18 months since Sister Sriyani from the Congregation of the Sisters of Mercy and the Most Sacred Heart of Jesus began helping drug convicts in Palembang, South Sumatra province.

Every Tuesday, the nun visits five Catholic men jailed for crimes related to drug abuse and offers them spiritual counselling.

Among them is Ahok, 27, who was jailed in October for using and selling drugs. He was given a seven-year sentence.

"His mother, whom I met when I was visiting jail last year, asked me to offer her son spiritual counselling," says Sister Sriyani.

To make her service effective, Sister Sriyani builds a mother-and-child relationship with Ahok, who calls her bunda (mother), as do other drug convicts in the jail.

"I approach him personally. I try to open his heart and listen to what his heart says," she explains.

It's an approach she believes works.

"Ahok once asked me: 'Bunda, what should I do to make me free from drugs?' I told him to repent and to fight against drugs," she recalls.

As part of what she does, Sister Sriyani usually invites the inmate to the prison's chapel to pray and meditate even though the latter is difficult for them because of the effects from their past drug taking.

"I often took Ahok to the prison's chapel. I asked him to say 'Jesus' over and over again," she says. 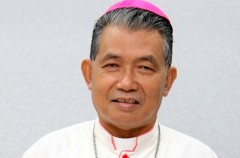 Sister Sriyani trusts that her service will have a positive impact on the drug convicts after their release.

"The most important thing for now is that they don't feel ignored and forgotten," she says. Bishops and superiors of various religious congregations in the Sumatra region meet in Padang, West Sumatra, to restrengthen their commitment to help drug addicts in the region. (Photo by Windy Subanto)

Sister Sriyani's efforts are in accordance with a commitment made by bishops and superiors of various religious congregations in Indonesia's Sumatra region to fight drug abuse.

Their commitment was restrengthened when they met again in Padang, West Sumatra province April 4-7.

Because of the extent of the drug problem, the Catholic Church says a strong commitment is needed in the Sumatra region, which includes the Medan and Palembang archdioceses as well as Padang, Pangkalpinang, Sibolga and Tanjungkarang dioceses.

The Pangkalpinang Diocese is an example. "It covers the small islands of the Strait of Malacca, which is on a drug smuggling route," says Bishop Hilarius Moa Nurak of Pangkalpinang, Bangka-Belitung Island provinces. Given the geographical situation, drugs have had a heavy impact on the young Catholics there, says the bishop.

The archdiocese also has a similar center for men which is managed by its commission for socio-economic development.

In Padang Diocese, West Sumatra, Father Florianus Sarno had to face drug abuse in his Holy Family Parish in West Pasaman within several weeks of his arrival to the isolated area. Nine young parishioners were on the local police's wanted list because of their involvement in drugs.

"This is very concerning. It means that drugs have reached remote areas," Father Sarno says.

To address drug abuse in the Sumatra region, the Catholic Church is working with the National Narcotics Board.

"We will work together with the board and local police as well as offering my parishioners counselling programs on the menace of drugs," Father Sarno says.

As part of the effort to combat the problem, the Medan Archdiocese is working with the local chapter of the National Narcotics Board to build a drug rehabilitation center in Lubuk Pakam.