Indian soldiers clear the area after two militants were killed in Jammu and Kashmir's Sopore town on Feb. 22. (Photo by IANS)

The violence-scarred Indian region of Kashmir is on alert for a new phase of suicide attacks.

Islamic militants, waging a war to free Kashmir from Indian rule, have warned of more suicide attacks after 40 Indian soldiers were killed in such an attack on Feb. 14.

India on Feb. 26 launched airstrikes against the militant group's training camp across the ceasefire line in Kashmir, the first aerial bombing over the disputed border since India went to war with Pakistan in 1971. Authorities said India had received credible intelligence that the group was training fighters for similar attacks.

The Feb. 14 attack was carried out by 19-year-old Kashmiri militant Adil Ahmad Dar, who rammed a vehicle full of explosives into an army convoy.

On Feb. 20, Riyaz Naiko, chief of Pakistan-based militant outfit Hizb-ul-Mujahideen, released an audio tape in which he warned of more suicide attacks by “Kashmiri children” in the coming days.

“We will keep on sacrificing our lives. We prefer to die than surrender. The day is not far when our 15-year-old children will strap explosives on their bodies and barge into your army vehicles. We prefer death over slavery,” he said.

“You will have to cry until the time you are here. The coffins of your soldiers will continue to fill until your army is here. We are ready to die but won’t allow you to live as well.”

Indian security personnel operating in Kashmir are discussing new arrangements to deal with the threat of suicide bombings.

“We are working on a new security scheme with the army and the police so that we are able to minimize this new threat,” Rajeev Bhatnagar, director-general of India’s Central Reserve Police Force, told media. 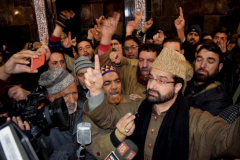 Pushed to the wall

Kashmiri separatist leader Mirwaiz Umar Farooq said it is worrisome to find that young people have been pushed to the wall to the extent that they will commit suicide bombings.

“Such a trend was never witnessed in Kashmir. The situation could turn more violent if India continues to ignore the people’s sentiment and crushes it with military might,” he said.

Sunil Bhat, a political commentator and blogger based in New Delhi, said the modus operandi adopted by terror groups is different this time.

“Earlier, militants had to cross the border and carry out suicide attacks. Now, local Kashmiris are volunteering for the purpose. This is indeed a very dangerous trend,” Bhat said.

He added that car bombings similar to those in Afghanistan and Syria have been introduced in Kashmir.

Radicalization of local people has increased since 2017, with young militants openly declaring allegiance to global terror outfits such as al-Qaida and the so-called Islamic State. The latter's flags have been waved at several protests or used to wrap the bodies of terrorists killed by security forces. Militants have been asking supporters to shout slogans such as “Khilafat ya Shahadat” (caliphate or martyrdom) during anti-India protests.

A police official in southern Kashmir, considered the militants’ hotbed, told ucanews.com that fears of Kashmir becoming another Afghanistan or Syria “seem to be coming true.”

“No one would have imagined a 19-year-old boy ramming 200 kilograms of explosives into a security bus. This happened and was an indicator of worrisome days ahead,” he said.

He said there was clear evidence that terrorist organizations were using social media to radicalize Kashmiri youngsters.

In the last 30 years, an estimated 100,000 people have died in Jammu and Kashmir, including civilians, militants and army personnel, after groups began an armed struggle for freedom from Indian rule or to merge with neighboring Pakistan.

In 2018 alone, there were 614 incidents of violence in the state in which 257 militants,  91 security personnel and 38 civilians were killed.