Archbishop Ignatius Suharyo Hardjoatmodjo of Jakarta has been re-elected president of the Indonesian Bishops' Conference for an unprecedented third time during a ten-day gathering of prelates.

The 68-year-old Archbishop Suharyo, will now head the organization for another three years until 2021.

Traditionally a president cannot serve more than two consecutive terms, however an "urgent need" cited by two of the 39 prelates at the gathering paved the way for Archbishop Suharyo's re-election.

The conference's executive secretary, Father Siprianus Hormat, announced Archbishop Suharyo's re-election during a concelebrated Mass led by Apostolic Nuncio to Indonesia Archbishop Piero Pioppo on Nov. 14 at Our Lady of the Assumption Cathedral Church in Jakarta.

"I don't know for sure what the urgent need was. But it was said that we needed someone based in Jakarta close to the central government so that communication would be easier if something happens," Archbishop Suharyo told ucanews.com.

He also speculated it could be to do with a prelate ad limina visit to Rome in June next year.

"A report must be filed during the visit. It wouldn't be easy if it was written by a new president," he said.

The ad limina visits are the meetings that groups of bishops from each ecclesiastical region in the world have with the pope every five years.

The conference did not give an official reason why the Jakarta archbishop was re-elected for a third time. 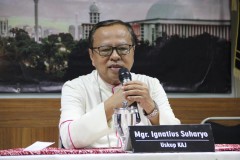 Despite the irregularity, Archbishop Suharyo said it would be business as usual for the conference.

Speaking about the gathering, Archbishop Suharyo said the prelates highlighted the current state of human rights and the failure of the government to address past human rights abuses.

He was referring to unresolved cases of serious human rights violations, allegedly committed by the military during 1998 riots that led to the fall of dictator Suharto and anti-communist purges in 1965-66.

"The Catholic Church wants human rights respected and protected. The core of which is the right to life and human dignity," he said.