Speakers from India, Pakistan and China highlight the increasing persecution faced by many Christians 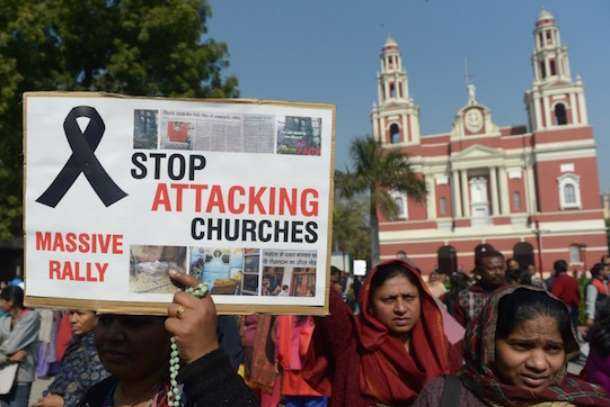 Shakeel Raphael projected an image of his brother Nadeem Samson on the screen, prison bars superimposed over the man's sorrowful face.

Three years ago, Samson, a Christian, was arrested and, Raphael believes, falsely charged with blasphemy — the crime of speaking out against Islam, the Prophet Muhammad or the Quran. He was beaten to near death and has been locked in a prison in Lahore, Pakistan, ever since.

Samson's life, his family's lives and the lives of the 24 other prisoners charged with blasphemy in Pakistan have been shattered, said Raphael. "But with your help and prayer, [God] can do miracles for my brother," he said.

Raphael was one of the many speakers at a conference titled "Christian Persecution Is Real" held from Sept. 11-12 at the Basilica of St. Mary in Alexandria, Egypt.

The speakers hailed from around the world, including India, China and Nigeria, but they all had one thing in common: They spoke for the persecuted Christians suffering within their homelands and around the globe.

Oluwasayo Ajiboye, a Nigerian and the president of Mission Africa International, spoke about what he believes is an ongoing genocide against Christians perpetrated by violent Muslim extremists, such as the terrorist organization Boko Haram.

"This genocide is a jihadist ideation. It's an attempt to rub out every group that says, 'We are not going to be Muslim,'" he said. "These (Christian) people are voiceless. They need your help to be their voice."

Xiqiu "Bob" Fu, the founder of ChinaAid and a Christian who fled China due to persecution, spoke about the human rights abuses being carried out by the authoritarian communist Chinese government.

Persecution used to be limited to those worshipping in house churches, or religious communities not recognized by the government, but now even members of state-sponsored churches are being targeted, he said. Those who disobey the government are arrested and tortured, even for crimes such as illegal charitable activity.

"This year in the first six months alone in one province, over 900 crosses have been demolished," said Fu. "This is the effort to extinguish and destroy the Christian faith."

"India has become the largest violator of religious freedom in terms of the sheer number of attacks on Christians and other religious faiths," said Prabhudos.

"The attacks may not end in loss of life because if a person is killed, it's flashed all over the world," he said. "So the strategy is, don't kill them, just make their life miserable. Make no mistake -- the humiliation, the suffering is real for the hundreds of victims every single day."

Prabhudos is worried the global importance of India will make the United States hesitant to criticize the Indian government, just as he believes it has failed to reprimand China. Even after Tiananmen Square, the leading hope of the world — America — chose to remain largely muted, he said.

"Today, people are arguing in the committee rooms and in the national security meetings that India is an important trading partner, we need India to neutralize China, we need India to deal with Pakistan and Afghanistan," he explained. "They claim the burning of churches and the killing of nuns is nothing but a few sporadic, isolated crimes and not the policy of the ruling party. We are shamelessly buying their talking points.

"India is sliding down a black hole right in front of our eyes, but today we have the same failed arguments to justify our policy. And we all know how it will end."

Conference attendees also viewed the documentary "Christians in the Mirror: Stories of Courage and Faith in the Face of Persecution from Syria, Iraq, Sudan, India and Egypt."

Throughout the two days, attendees were able to view the Save the Persecuted Christians display about "Warfare on Women," highlighting how women are often targeted or most harmed by religious persecution.

"There's a big temptation just to tune everything out, to go back to Netflix, to go into our happy little bubbles," said Father David A. Dufresne, parochial vicar at the basilica. "This should motivate us to pray, to do penance, to do acts of reparation for these sins against our brothers and sisters in Christ and it should give us a greater spirit of solidarity, to recognize that we are one body of Christ."

Former Congressman Frank Wolf of Virginia spoke passionately about the plight of persecuted Christians worldwide, many of whom he has met through his advocacy work in and out of Congress.

"Right now, there is more persecution taking place worldwide than any other time in modern history," he said. He noted the struggles of Christians in the Middle East, in China, Hong Kong and Nigeria, particularly the Chibok schoolgirls kidnapped by Boko Haram, whose plight spawned the viral hashtag #BringBackOurGirls.

"The girls were kidnapped and almost half of them have not come back. All the world leaders did #BringBackOurGirls and in the last three or four years, not one of those world leaders has ever mentioned those girls again. The girls have been forgotten," he said. "Boko Haram has killed more Christians in Nigeria than all of the people that ISIS killed in Iraq and Syria combined."

Wolf said he was reminded of the words of the Rev. Martin Luther King Jr. in his "Letter From a Birmingham Jail." In it, the civil rights leader speaks of the deep disappointment he felt when his efforts were derided or ignored by fellow religious leaders.

"I believe that these powerful words of Rev. King can apply today to the issue of religious freedom," he said.

"With all the persecution going on all over the world, what remains to be seen is whether the people of God will rise to the occasion for such a time like this. In the pulpits and pews of many Western churches, I would say we have heard the sound of silence," Wolf said. "Let us commit not just to each other but to God that we will pray, we will speak and then we will act regardless of where it leads us."