Sentenced to death, freed then re-arrested, Ishag is now in US embassy 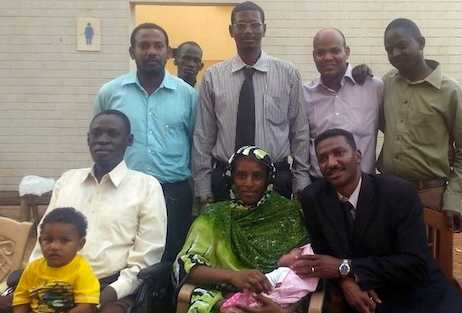 Meriam Yahia Ibrahim Ishag, her husband Daniel Wani, her newborn baby and 20-month-old son, with members of the legal team who defended her (picture: AFP Photo/Ho)

A Sudanese Christian woman detained when she tried to travel to the United States after her release from death row was freed Thursday and took refuge at the US embassy, her lawyer said.

"She is in the US embassy now," Mohanad Mustafa said of Meriam Yahia Ibrahim Ishag, 26.

"She and her husband think this is a safe place for them," after receiving death threats, Mustafa told AFP.

In Washington, State Department spokeswoman Marie Harf said Ishag and her family were "in a safe location" and Sudan's government "has assured us of the family's continued safety."

Citing privacy considerations, she declined to specify further the location of Ishag, whose arrest -- and potential execution -- raised deep concern among human rights campaigners in the United States.

Earlier Thursday, Ishag had still been in police custody while her legal team tried to find an acceptable person to vouch for her after her release.

She is charged with forgery and providing false information in relation to a South Sudanese travel document she used to try to leave the country on Tuesday.

They later found a Sudanese guarantor, he said. The person, who was not identified, provided assurances that she would report to judicial authorities as and when required.

Ishag had been held at the police station in Khartoum's Arkawet district since Tuesday after national security agents stopped her and her family from leaving Sudan.

According to her American husband, Daniel Wani, diplomats from the US embassy had escorted the couple and their two children to Khartoum airport, from where they planned to travel to Washington.

Wani said they "want to get out of here as soon as possible" because of the threats against his wife.

But Mustafa said "there is a criminal case against her. She cannot leave Sudan."

South Sudan's embassy says Ishag is entitled to travel with documentation from that country because her husband and her children are South Sudanese.

Khartoum says she should have used a Sudanese passport, and on Wednesday summoned the charges d'affaires of Washington and Juba over the incident.

On May 15, a lower court judge sentenced Ishag to hang for apostasy from Islam, in a case that raised questions of religious freedom and sparked an outcry from Western governments and human rights groups.

Ishag was convicted under Islamic sharia law that has been in force in Sudan since 1983 and outlaws conversions on pain of death.

An appeal court freed her on Monday from the women's prison where she had been detained with her children, one of whom was born in jail after she received the death sentence.

After her release she immediately went into hiding because of the threats to her life.

Christian activists say her "alleged brother" stated that the family would carry out the death sentence if she were acquitted.

Ishag was born to a Muslim father and an Ethiopian Orthodox Christian mother.

When Ishag was five her father abandoned the family, leaving her to be raised by her mother, according to the Roman Catholic Archdiocese of Khartoum, which said she joined the Catholic church shortly before she married. AFP