Study dismisses religion as cause of conflict in Marawi 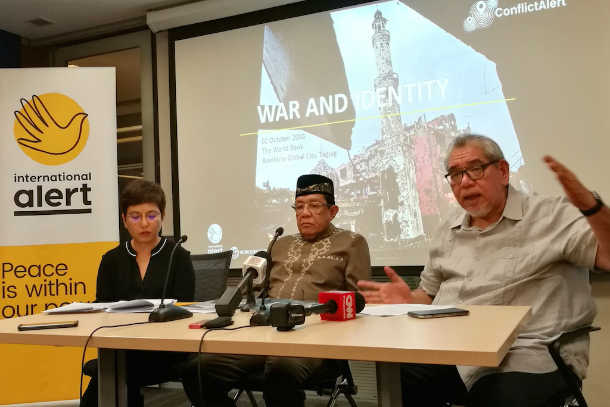 Religion has nothing to do with the armed conflict that devastated the southern Philippine city of Marawi in the middle of 2017.

This was part of the findings of a study released in Manila on Oct. 2 by International Alert, an independent group operating programs around the world to address conflict.

It noted that the war in Marawi, which resulted in the displacement of almost half a million people, was not an inter- or intra-religious conflict.

She said extremist groups in Mindanao "instrumentalized existing identity-based conflicts to forge alliances that strengthened their base and widened their reach."

The study noted that the emergence of groups that pledged allegiance to the so-called Islamic State in Mindanao was due to a combination of political and "shadow economy-related" causes.

Dela Rosa said the survival of extremist groups in the central region of Mindanao reinforces the belief that these groups had access to funds from various sources, including "shadow economies."

The kinship networks of clans in the area also allowed the expansion of the group's resources and facilitated their escape.

Dela Rosa said there is an urgent need for "new and adaptable responses" to the conflict in the southern Philippines.

"Current strategies to fight violent extremism are not shaped by a deeper analysis of its origins and remain dominated by a singular military approach to the problem," she said.

She stressed what described as the need to shift "institutional frameworks ... to settle violent conflict among clans at the local level."

Francisco Lara Jr., senior peace and conflict adviser for International Alert in the Philippines, said that despite the government passing a law to give the Moro people in Mindanao an autonomous region, people in the region continue to feel uncertain and worried about their security.

He said good governance through an "inclusive, professional, egalitarian, and merit-based system" is fine, but the transition to a new political entity would require the full support and assistance of clans and local strongmen for it to be carried out peacefully.

The International Alert study noted that restricted access to firearms after President Rodrigo Duterte declared martial law in the region helped to reduce violent incidents in Mindanao in the past year.

Lara, however, said it is expected that the "first few months" of the transition to a new autonomous Muslim region would be "a time of fire-fighting and trouble-shooting."

A transition body will run the new Bangsamoro autonomous region for three years from 2019 before a permanent ministerial government is put in place.

The new political settlement is the product of the 2014 peace agreement between the government and the rebel Moro Islamic Liberation Front.