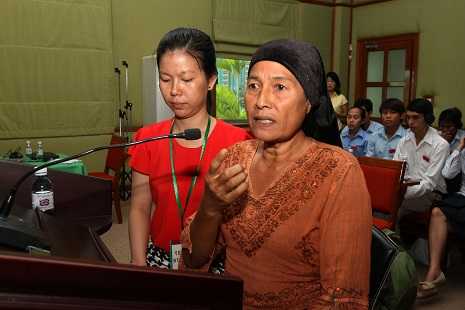 “They hated Khmer Muslim. They just had to rape them. They said that they would rape beautiful Khmer Muslim women": Unnamed respondent.

As the Khmer Rouge killed and maimed Cambodian society into a twisted utopia during the 1970’s, those who failed to match the Khmer ideal faced special punishment. Thirty-five years later it is well known how these classifications impacted intellectuals, bourgeoisie, the educated and urbanites – they were systematically killed. Less well documented is the impact on ethnic minorities.

Those standing trial at the Khmer Rouge tribunal face genocide charges during an upcoming session of the case. But many historians still argue that ethnic Cham Muslims and Vietnamese were treated no better or worse than Khmer counterparts.

A few years ago, one of the tribunal’s highest international judges characterized the regime as “unusual [in that] it does not contain allegations of widespread violence against women because they are women”. Efforts to include crimes of ethnic-based violence have faced a similarly difficult task.

In Sexual violence against Ethnic Minorities during the Khmer Rouge Regime, released this week by the Cambodian Defenders Project, researcher Rochelle Braaf argues that Cham Muslims, ethnic Vietnamese, and Khmer Krom – Cambodians from parts of Southern Vietnam – “were singled out for some forms of sexual violence, like rape before execution".

“Additionally, there is evidence that the Khmer Rouge’s policy of forced marriage was used strategically by the state to ‘dissolve’ ethnic groups into the broader Khmer population,” Braaf writes.

The study draws on in-depth interviews with 105 Cham Muslims, ethnic Vietnamese and Khmer Krom. Though the pool is small, it builds on similar recent research.

“The few pioneering studies that have examined this issue have suggested that some ethnic minorities may have been specifically targeted for this form of violence,” Braaf writes, referring to sexual abuse.

Her study bears that out. More than half of respondents witnessed the rape of ethnic minority women and girls “often as gang rape perpetrated by multiple rapists”. More than one third said they knew someone forced into sexual slavery, half of whom were from ethnic minorities.

As with Khmers, forced marriage was rife. But in the case of ethnic minorities, it served the secondary purpose of “dissipating the community”.

One respondent explains: “During that period, they forced us not to marry with Cham, when we are Cham. They asked us to marry with Khmer… [They told me] you need to have a Khmer one, because you come to live in Cambodia. Now all people are Khmer.”

At the launch of the report in Phnom Penh on Monday, Braaf said it appeared the Khmer Rouge was “actively trying to breed people out from those communities".

“In some cases, they killed the men and forced the women to marry into the Khmer population,” she said.

While lacking the extreme ethnic cleansing of other genocides such as Rwanda, the Khmer Rouge regime doubtless targeted minorities.

Historian Ben Kiernan estimates in his book The Pol Pot Regime that ethnic minorities died at double or triple the rate of Khmers (who nevertheless made up the bulk of victims). While the death rate among the Khmer population was 15 to 20 percent, 36 percent of Cham Muslims died, 40 percent of Laotians, 50 percent of Chinese, and almost 100 percent of the remaining Vietnamese unable to flee before 1976, a year after Pol Pot’s soldiers took Phnom Penh.

Youk Chhang, director of the Documentation Center of Cambodia, said the Khmer Rouge attitude toward minorities was the endgame of longstanding plans for a mono-race utopia – even minority Cham, who came to Cambodia from Vietnam 800 years ago, were considered outsiders.

“I think that when you look at Cambodian society, the minority has never been treated as an equal,” he said.

Sexual violence was likely linked to ideas of Khmer purity, said Theresa de Langis, an expert on gender-based violence in conflict who has studied women living under the Khmer Rouge.

“It’s starting to follow a pattern that sexual violence was used as a tactic to intimidate, control and terrorize communities, that it targeted specific communities and it helped to emphasize stress on a pure Khmer nation. Whenever you start to talk about purity as race line, you’re evoking a question of genocide.”

De Langis cautioned that it may be premature to draw conclusions regarding rape as a form of genocide under the Khmer Rouge, but said the latest research “opens up some very important questions”.

Sexual violence as a form of genocide has been well documented in numerous conflicts, especially in Rwanda and Bosnia.

Even during the Holocaust – which until recently was believed to be wholly devoid of sexual abuse – rape appears to have been a common tactic for abusing and subjugating Jewish women, according to research that has emerged in the last half decade. (Previously, it was simply accepted that the Nazi laws against Rassenschande, or race pollution, made rape all but impossible).

As a form of genocide, rape can be “highly effective”, said Clair Duffy, a senior legal advisor at the International Bar Association’s International Criminal Court Program.

“It really breaks down their society, which is why it is so effective,” said Duffy, who previously worked as a Khmer Rouge tribunal monitor for the Open Society Justice Initiative.

Using Rwanda as an example, she noted: “Not only were women raped prior to being executed and taken as property by the Hutu militia, but the long term effect is that women are then ostracized by their communities if they do survive.”

The ongoing consequences of rape during conflict often exceed that of other crimes.

“In terms of the long term generational impact, it is horrific. The crime is almost a continuing crime because the acts themselves are extremely brutal; the consequence of those acts – women often had a lot of physical ailments – the ongoing stigmatization of that meant they were completely shunned by their community, and the children borne from those assaults were also shunned,” Duffy said.

Researcher Farina So, who has extensively studied the experience of Cham Muslims under the Khmer Rouge, said there did not appear to be comparable fallout in Cambodia.

“Most of them tried to hide the story. We can say stigma, but in the community, especially in the past, people didn’t accept that because it kind of ruins the value of the community,” she said.

With victims loath to speak and predominantly male investigators and historians unlikely to ask, many long believed that rape was all but non-existent under the Khmer Rouge. As with the Holocaust, there appeared to be strict laws under the Khmer Rouge. Code Number 6, the regime’s “moral policy”, ordered cadres to “not abuse women” by having forced or consensual sex outside of marriage, and prison records show cadres were punished for rape.

During the Khmer Rouge tribunal’s first case against Comrade Duch, the head of the notorious prison, torture and execution facility S-21, a single instance of rape made it into the charges, but only under the heading of torture – rather than a separate crime against humanity.

In the current case, which is trying the regime’s top living leaders, Brother Number 2 Nuon Chea and Khmer Rouge head of state Khieu Samphan, charges of rape have been made only in the context of forced marriage during the next stage of hearings.

The case’s indictment admits that Code 6 was ineffective at preventing rape, but says its existence means “it cannot be considered that rape was one of the crimes used by the CPK leaders to implement the common purpose”.

But as the stories slowly come out, it has become increasingly clear the Khmer Rouge did indeed use sexual violence in a way not entirely dissimilar to that of other genocidal regimes. A number of researchers have come to believe Code 6 was misinterpreted.

“The rule not intended to be a prohibition against rape – it’s a rule to prevent and prohibit sex outside state sanctioned marriage – that was a way to regulate sexuality,” said de Langis.

Farina So called the law “a shield” which long obscured many historians’ and judges’ understanding of the role rape played.

“Especially in Rwanda, especially in Bosnia – you can see perpetrators of the regime trying to use rape as a form of genocide, it clearly shows and we can see it. But for the Khmer Rouge, under communist rule, it’s a little bit complicated because in the law, the Khmer Rouge also stated that they condemn moral offenses – which means no rape, no sexual intercourse outside marriage… However, the Khmer Rouge used that as a shield in order to victimize women.”

Three decades later, the impact has remained. When So, who is from a Cambodian Cham Muslim community, began her research in the mid-2000s, she encountered woman after woman who refused to say a word.  Only after repeated visits and significant trust-building did women begin to tell their stories.

“I can see the changing attitude now,” she said. “They try to understand how the regime, the genocidal policy affects not only men but also women and children, the whole community.”