People wait to fill empty oxygen canisters outside a factory in Yangon on July 14 amid a surge in coronavirus cases in Myanmar. (Photo: AFP)

A young man queued up in a long line to refill oxygen cylinders for his parents in Yangon, Myanmar’s commercial hub. After waiting for several hours, his turn came but it was too late for his loved ones.

“Please give our oxygen cylinder to other people as my parents have already died at home,” the young man said in a video clip which went viral on social media.

It was one of the sorrowful stories of suffering following the deadly Covid-19 third wave fueled by the Delta variant sweeping a country where the healthcare system has virtually collapsed. Thousands of doctors, volunteers and civil servants have joined a mass civil disobedience campaign to oppose the military regime.

People have flooded social media with pleas for oxygen supplies as hundreds die as a result of not getting oxygen.

Myanmar reported more than 5,000 cases and 223 deaths on July 18, the highest toll in the country since the Feb. 1 coup.

A 60-year-old woman passed away due to lack of oxygen despite volunteers searching for oxygen in Thibaw town, northern Shan state, last week.

“She died just within 45 minutes while volunteers were looking for oxygen as the whole family is also infected with Covid,” a priest told UCA News.

Many people have taken the option of joining long queues to refill oxygen cylinders for their loved ones instead of going to military-run hospitals due to mistrust of the junta.

“The state healthcare system has collapsed and the situation is out of control amid the lack of resources and proper management,” *Mg Mg, a Church social worker from Yangon, told UCA News.

*Desmond Naw, a resident of Yangon, said people don’t go to military-run hospitals due to lack of trust. 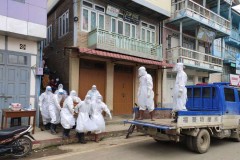 “People who are infected with the deadly virus stay with oxygen at home instead of going to the private hospitals, which are already full, and the military-run hospitals,” Naw told UCA News.

*Esther Phyo, a Catholic woman from Yangon’s outskirts, said she had to stay at home with her father and brother as there is no quarantine center in the township.

“So far, I don’t need oxygen and I am just suffering from coughing. But I am worried for my loved ones being infected,” Phyo told UCA News.

“I expect the Church helps the needs of local communities as many families are struggling for their daily food as well as with Covid-19.”

Every day my team is collecting between 30-40 dead bodies ... I think other teams will be the same like us. Sometimes there are two dead bodies in one house

With hospitals empty of pro-democracy medical staff, volunteers are going house to house to collect the fast-rising number of victims dying in their homes.

Early each morning, Than Than Soe's phone starts ringing with requests from family members of those who have died in Yangon.

She writes the name, address and contact number of the victim in a ledger and dispatches a team to their home.

"We are running our service without resting," she told AFP at the bustling office of her volunteer group.

Every day "my team is collecting between 30-40 dead bodies ... I think other teams will be the same like us. Sometimes there are two dead bodies in one house."

Hospitals around the country are empty of both doctors and patients because of a long-running strike against the military regime.

"We used to send patients to hospitals," he told AFP. "We asked patients, 'Which hospital do you want to go to?' But now it's different. When we receive incoming calls, we have to ask, 'Which cemetery?'"

At the house of one victim, Sann Oo and the team strap the corpse onto a stretcher, cover it with a blanket and navigate the narrow wooden staircase down to the street. They carry the stretcher to the van while another volunteer hits a gong used in Buddhist funeral rites.

As they arrive at the Kyi Su crematorium, there are at least eight other ambulances already parked outside. The words "Dead Body Carrier" adorn the windscreen of one of the vehicles.

Medical workers who were at the forefront of Myanmar's Covid-19 response before the coup have been targeted after leading early mass protests against junta rule.

Top health officials, including the head of Myanmar's vaccination programme, have been detained and hundreds of others have gone underground to avoid arrest.

Last week the State Administration Council — as the junta dubs itself — called for doctors and nurses to volunteer for the Covid-19 effort, admitting it was facing "difficulties" in controlling the surge.

State media reported on July 17 that authorities were rushing in oxygen supplies from neighbouring Thailand and China.

The UN's special rapporteur for human rights in Myanmar last week warned the country was at risk of "becoming a Covid-19 super-spreader state".

Than Than Soe said two of her team had tested positive since the recent spike, and one has died. "Everything I hear is only bad news," she added.

One man her office helped called his brother at the Kyi Su cemetery, where his mother was about to be cremated, and asked him to wait for the ambulance bringing their father, who had just died. "I want them to meet one last time," he sobbed into the phone.

For Than Than Soe, such scenes have become constant. "Sometimes I don't pick up the phone and don't want to answer calls," she said. "It's not because I don't want to do my duties ... it's because I'm suffering a lot of pain."

*Some names have been changed to protect their identity.