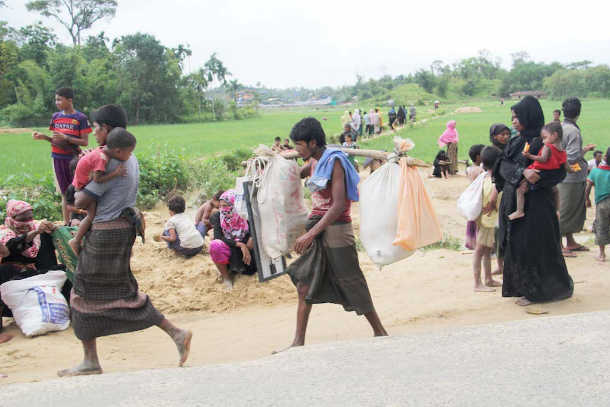 On April 28, a court in Dhaka sentenced three Rohingya refugees to 10 years in jail for their extremist connections.

The trio was allegedly members of the now-defunct Rohingya Solidarity Organization (RSO), an insurgent outfit that was most active in Myanmar's Rakhine State and the Rohingya camps in Bangladesh in the 1980s and 1990s.

The court verdict also noted the three men were responsible for carrying out a bomb attack in Burdwan district in the neighboring Indian state of West Bengal in 2014 that left two people killed and several injured.

In 2014, police arrested Nur and Yasir in the Bangladesh capital with bomb-making materials to be used in improvised explosive devices (IEDs).

They were charged under the Explosives Substances Act, but Omar escaped and is presumed to have fled the country. He was sentenced in absentia.

News of their convictions sent shockwaves through the Rohingya communities in 30 camps in the Cox's Bazar district of southeastern Bangladesh, which house hundreds of thousands of Rohingya refugees.

It came hot on the heels of violent protests in the district as locals demanded that all of the refugees be sent back to Myanmar immediately.

Denied citizenship and basic rights in their home state of Rakhine, most of this beleaguered community fled to Bangladesh in 2016 and 2017 to escape deadly Myanmar military crackdowns. These had come in response to alleged attacks on security forces by the Arakan Rohingya Salvation Army (ARSA), a shadowy Rohingya militant outfit.

Speaking to ucanews.com, a number of Rohingya refugees expressed their dismay at how other members of this vulnerable Muslim minority had jeopardizing the reputation of the group as a whole.

"We have fled our homeland and found a place to survive in Bangladesh. We are greatly saddened to hear stories about other Rohingya committing crimes and being arrested or jailed. A few bad eggs are tarnishing the image of the whole community," said Abul Hashem, 44, a Rohingya father of five who stays in the Balukhali camp.

Hashem, who moved to Bangladesh in 2017, said most Rohingya firmly denounce those among their peers who choose to take up arms with militant groups.

"It was those kind of militant attacks on (Myanmar's) security forces triggered the crackdown against us in 2016 and 2017, so most Rohingya blame the militants for inviting the disaster on the rest of us," he said.

"We should all refrain from doing anything that could give more credibility to the Myanmar government's false claims that all Rohingya are criminals and terrorists," he added.

Time and again, law enforcers, local media, and observers in Bangladesh have pointed to the increasing involvement of Rohingya in various criminal activities, including human trafficking, drug dealing, theft and militancy.

Since 2016, there have been about 60 murders recorded in the camp, mostly from knife attacks, many of which remain unsolved.

Rivalries among different groups to establish control in the camps, personal grudges, and rampant poverty have been cited as the main reasons for the killings.

Dozens of Rohingya have been arrested and at least one shot dead by police in recent months for allegedly being involved in drug dealing and human trafficking.

Local media reported recently that some Rohingya have attacked journalists and aid workers — both Bangladeshis and foreigners — in the camps, one of several factors causing local people to resent their presence.

On Dec. 16, 2016, the Brussels-based International Crisis Group (ICG) reported on the emergence in Rakhine of a new group of Muslim insurgents called the Harakh-al-Yaqin (Faith Movement). This is seen as the first incarnation of what later became ARSA which was blamed for attacking Myanmar security forces three years ago, which triggered the military and Buddhist-led atrocities against the Rohingya, and their consequent exodus to Bangladesh.

In a report published on April 25, the ICG said that due to the slim prospects of their being safely returned to Myanmar, because of a shelved repatriation deal, and the dismal living conditions in the camps, the Rohingya remain vulnerable to being seduced by "criminal gangs," including the ARSA militants who are still active in the camps.

A lack of monitoring has allowed a Bangladeshi hard-line Islamist group, Hefazat-e-Islam, which has called for jihad against Myanmar in response to the atrocities meted out against the Rohingya, to influence the madrasa network in the camps, the report added.

In a statement, the ARSA rebutted the IGC's claim that it and other alleged criminal elements were active in the camps.

The group said via its official Twitter account that the ICG was trying "to defame and manipulatively discolor ARSA's legitimate long-running struggle" to fight for the persecuted Rohingya community in Rakhine, irrawaddy.com reported on April 30.

"When a group of people face persecution for a long time, those people (can) become victims of frustration, and may resort to criminal and violent acts when they can," Syed Mahfujul Haque, who lectures on criminology at Dhaka University, told ucanews.com.

"The same applies to the Rohingya. They have suffered for decades, and now more of them are turning to crime to survive, both in Rakhine and in Bangladesh."

However, Rohingya insurgents have been fighting against oppression in Myanmar for years, he noted.

Their geographical proximity to the Golden Triangle, a notorious drug-production and smuggling region, exposes them to the temptations of funding their operations through illicit activity, Syed added.

"The true extent of the Rohingya crisis is huge, and Bangladesh is finding it very hard to cope with it," he said.

"Unless some real headway is made to end this crisis, with the Rohingya repatriation and guarantee they can live safely there and enjoy a better life, this community will fall prey to more criminal and violent acts," he said.

"Law enforcers are vigilant but the overwhelming number of refugees in the camps makes it difficult for them to carry out proper surveillance," Syed said.

"There are strong indications that extremist elements are still active in the camps, and they must be checked and neutralized."

The sheer numbers make it almost impossible for local security forces to do their job effectively, said James Gomes, regional director of the Chittagong branch of the Catholic charity Caritas, which operates in the camps.

"Most crimes in the camps occur at night when aid workers withdraw to their bases in Cox's Bazar," he said.

"The security patrols are also not proving that effective because the police hand this duty over to Rohingya watchmen. The situation must be controlled before it gets worse," Gomes told ucanews.com.

Iqbal Hossain, the assistant police superintendent in Cox's Bazar, agreed the Rohingya are vulnerable to turning to crime, but brushed off talk of militant links.

"We've increased our patrols in the camps, and we have placed some of the Rohingya refugees on watch lists for greater surveillance on suspicion they may carry out criminal activities," he said.

"But there is no proof that militant groups like the RSO or ARSA are either living in the camps or seeking new recruits there," Hossain told ucanews.com.

Muhib Ullah chairs the Arakan Rohingya Society for Peace and Human Rights, an advocacy group based in the Kutupalong camp in Cox's Bazar. He said most Rohingya despise criminals.

"It is true that power struggles exists among some Rohingya groups, and some are getting involved in crime to serve their own ends," he said.

"But most Rohingya are peaceful people and they denounce any act of crime or violence," he added. "They are ready to cooperate with Bangladeshi law enforcers to pass on information and (help to) arrest those who are trying to destroy peace in our community."