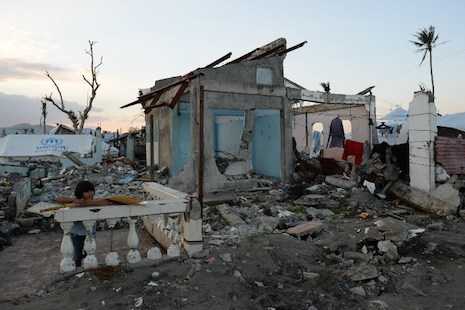 A young-survivor of super Typhoon Haiyan stands at a destroyed house along the coastal area of Tacloban City, Leyte province, in central Philippines on February 15, 2014 (AFP Photo/Ted Aljibe)

A "strong statement" on the environment is expected from Pope Francis when he visits Sri Lanka and the Philippines this week.

"I am sure that the pope will be harsh in criticizing industries that contributed to climate change," said Fr Aris Miranda, head of the Humanitarian Mission Office of the Camillian religious order.

"I think the pope should be strong in his position on climate change," said Miranda, who is also consultant-general for the congregation’s ministry.

Last week, the Vatican announced that the pontiff, who is planning to issue an "encyclical" on the environment later this year, will speak about the issue during his trip to Asia January 13-19.

A papal encyclical is an exhortation on issues deemed significant by the pope.

"I think the encyclical on climate change will challenge all of us," Miranda told ucanews.com in an interview in Rome.

In May last year, Pope Francis called on Catholics to work for the protection and preservation of the environment, warning that: "if we destroy Creation, in the end it will destroy us".

He also called the destruction of the rainforest a "sin".

"I think Pope Francis will challenge nations in this encyclical," Miranda said. He said that while several countries already signed a treaty on climate change, "we want to see that the signatures can do something".

The priest said the content of the encyclical will "support the findings" of the Intergovernmental Panel on Climate Change (IPCC).

In the Philippines, Redemptorist priest Amado Picardal, who is known for environmental activism, expressed confidence that Pope Francis will rally the people to fight against climate change during his visit there this week.

"His coming is not only to express compassion and sympathy to disaster victims," the priest said.

On January 17, Pope Francis is to visit the province of Leyte in the Philippines, where at least 7,500 people died during Typhoon Haiyan in 2013.

Picardal has been critical of the Philippine government’s focus on disaster relief and management that fails to address climate change and its connection to typhoons.

"The government missed many things with regards to climate change mitigation. It has many laws, but it lacks seriousness in its implementation," the priest told ucanews.com.

In its report "Can't Afford to Wait," Oxfam noted that "Asian governments are not prioritizing disaster risk reduction initiatives, despite projections that the region will suffer more from climate change in the future".

In its "Strategy for Disaster Risk Reduction," the United Nations noted that 78 percent of people killed by disasters lived in Asia although only 60 percent of global disasters occurred in the region.

"If not adequately addressed, climate change could set back the region’s development and poverty eradication efforts," Oxfam's report said.