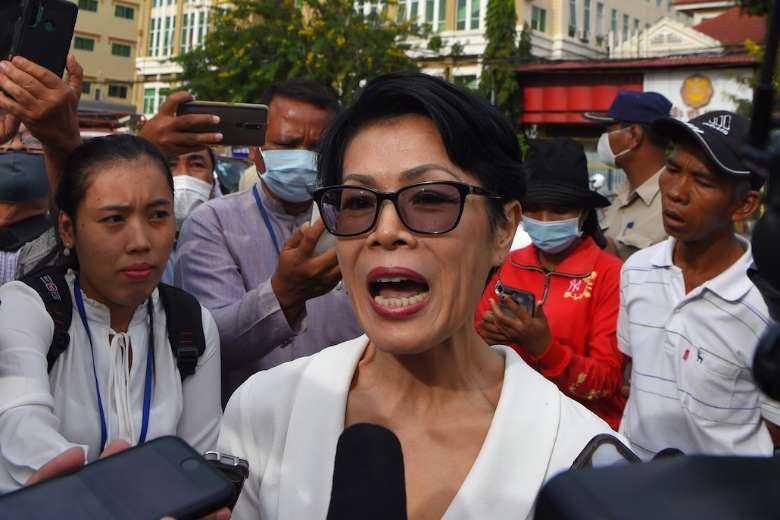 Cambodian-American human rights advocate Theary Seng speaks to the media before a hearing at Phnom Penh Municipal Court on Nov. 26, 2020, during a mass trial against more than 100 opposition members and activists charged with conspiracy to commit treason related to self-exiled opposition figurehead Sam Rainsy’s failed plan to return to the country in 2019. (Photo: AFP)

Cambodian police have detained more than 100 striking casino workers for breaching Covid-19 health protocols amid accusations the authorities were using the pandemic as a cover to crack down on industrial action deemed illegal by the courts.

Reports say 64 striking workers at the NagaWorld casino complex were detained on Feb. 21 and a further 39 on Feb. 22 after two workers tested positive for Covid-19. Of them, 62 were released but 41 remain in custody.

Female workers claimed they were sexually harassed after they were taken to an abandoned building that once housed an NGO.

Worker Meach Srey Oun said it had no running water and was “really dirty.” She also told Radio Free Asia that two workers were injured while being arrested while security guards at the detention center had touched the breasts of female strikers.

“We will continue to demand justice until justice prevails,” Meach Srey Oun said.

Protests erupted on Dec. 18 over the sackings of about 1,300 workers, many of them trade union leaders. Strikers also want improved redundancy packages but NagaWorld insists the layoffs were fair and necessary to save costs after casino returns slumped due to the pandemic.

Police have also alleged the strikers were financially backed by foreign and local NGOs and have warned they risked being charged with inciting serious social unrest in violation of articles 494 and 495 of the penal code.

These are the same charges police have used to round up supporters of the outlawed opposition Cambodia National Rescue Party (CNRP) over the last two years. To date, at least six people from the casino have been charged.

“The government’s persecution of union activists appears aimed at blunting the growing unity and strength of Cambodia’s union movement and their support for the NagaWorld strikers.”

The Health Ministry has also ordered hundreds of strikers to take a Covid-19 test after one union member tested positive. It said anyone who tested negative still had to self-isolate for seven days while those who tested positive were sent to a treatment center.

The Cambodian-American lawyer arrived in court on Feb. 21 after completing a barefoot walk dressed as a Chinese peasant with a Manchu haircut, which she said was a protest against Chinese investment, or as she put it, the “unwanted colonialism of Cambodia by China.”.

She began her protest walk to the court at NagaWorld to also “draw attention to the plight of the employees on strike who have been detained and blocked from holding their peaceful strikes.”

Her trial is continuing.