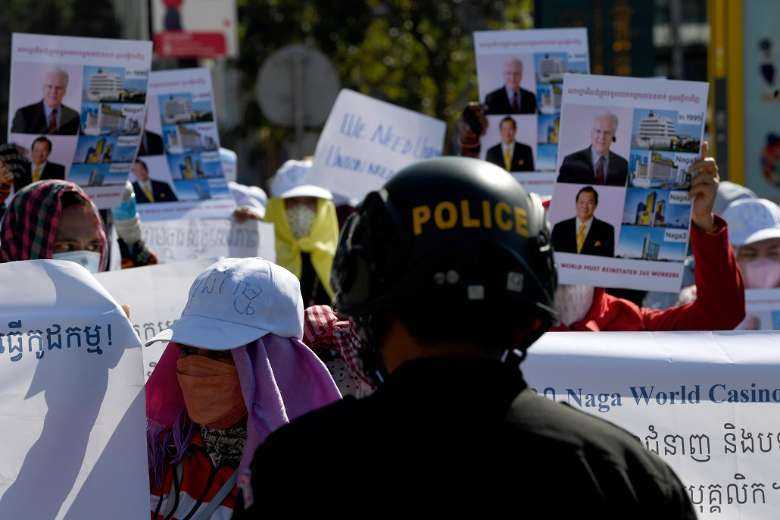 A policeman blocks workers from NagaWorld casino holding placards during a protest outside the National Assembly in Phnom Penh, Cambodia on Jan. 4. (Photo: AFP)

Authorities have ordered at least 200 striking casino workers to remain home and immediately halt all protests outside the NagaWorld entertainment complex after 29 protesters tested positive for the Omicron strain of Covid-19.

The order to halt all protests was delivered by the Phnom Penh Commission to Combat Covid-19 and warned protesters risked fines and imprisonment if they did not obey pandemic rules.

“Should protesters be defiant and continue to assemble for rallies, which could be a catalyst for a community outbreak of Covid-19, the individuals causing trouble – by not following the health and administrative measures – will be legally responsible. No excuses,” it said.

However, activists argued the authorities were using the pandemic as an excuse to end the seven-week dispute which has won some support from unions and workers elsewhere in Cambodia, and also in Malaysia, home to NagaWorld owner, the billionaire Chen Lip Keong.

Striking staff have been told to stop protesting outside the casino and self-isolate for seven days – even if they test negative – after one protester tested positive on Friday evening prompting the health department to order all protesters must be tested within three days.

“I think the rule isn’t right,” striking casino supervisor Mey Vanna told Voice of Democracy (VOD). “The rule should only apply to people who test positive.”

VOD also reported that 255 workers were tested for Covid-19 on Saturday and on Monday the health ministry issued a statement saying 29 of them had tested positive.

So far eight unionists have been jailed and Phnom Penh Municipal Council has deemed the daily protests illegal since they erupted on Dec. 18, 2021 over the sackings of about 1,300 workers, many of them trade union leaders. Police said a further four arrest warrants were issued Sunday.

They also want improved redundancy packages, however, NagaWorld insists the layoffs were fair and necessary to save costs after its casino operations were severely curtailed by the pandemic.

Police have also alleged the strikers were financially backed by foreign as well as local NGOs and have warned they risked being charged with inciting serious social unrest in violation of articles 494 and 495 of the penal code.

These are the same penal codes that have been used to charge journalists, environmentalists and supporters of the banned opposition Cambodian National Rescue Party in recent years amid a crackdown on dissent.

Striking casino workers have attracted the attention of human rights workers and Western embassies who fear a heavy-handed government response will only contribute to the decline of free speech.

The US embassy has said it was closely following “the troubling arrests” of NagaWorld unionists noting that freedom of speech and association are guaranteed in the Cambodian constitution.

Cambodia ranked among the worst in Asia on Transparency International’s 2021 index for perceptions of corruption while its judiciary ranked 127 out of 128 places by the World Justice Project for the same year.