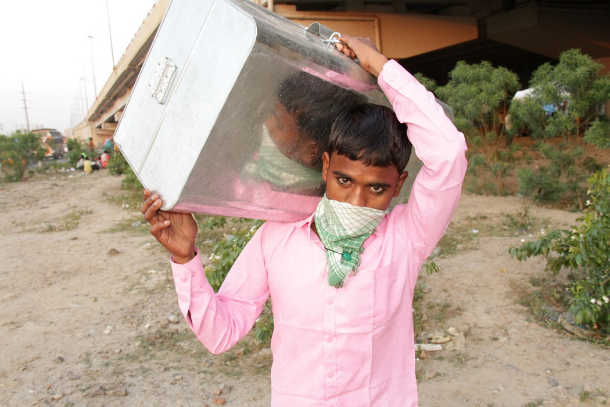 A migrant worker from Bihar wanting to return home waits to cross the Delhi-Uttar Pradesh state border in Ghazipur on May 16. (Photo: Bijay Kumar Minj/UCA News)

Media reports on hardships suffered by migrant workers stranded due to India’s nationwide Covid-19 lockdown have prompted the Supreme Court to demand that federal and state governments take action to help them.

The court called on them to provide a list of measures by May 28 in a move that civil society and church groups hope will push authorities into helping millions of people who they say have largely been ignored during the pandemic.

“Justice delayed is justice denied, which currently applies to poor migrant workers who are on roads or in quarantine centers hoping to reach their chosen destinations. With this move by the Supreme Court, I believe things will move faster,” Father Anand Mathew, convener of the civil group Sajha Sanskriti Manch (United Forum for Cultural Diversity), told UCA News.

“It was total discrimination against the poor. We welcome the court’s step, although it is quite late, but we hope that its intervention will prompt the authorities into helping and addressing the needs of migrant workers still struggling with uncertainty,” the Indian Missionary Society priest said.

He said the Supreme Court’s intervention will help address concerns from critics after it recently dismissed a petition calling on the government to provide food for stranded migrant workers and help them return home.

Activist Minakshi Singh said she welcomed the Supreme Court’s intervention but doubted whether authorities will be spurred into taking effective action.

“The federal government, as well as state governments, have completely failed to address the real issues facing migrant workers who have been on roads without food, water and shelter for days. The government will not take care of them because they are poor and have no voice,” she said.

Many see the court ruling as a very significant step after it appeared quite reluctant to take up the issue of migrant workers.

However, Justice Ashok Bhushan on May 26 said the court was being forced to act after receiving disturbing reports about hardships from non-governmental organizations and the media.

It said reports have been continuously showing the “unfortunate and miserable circumstances of migrant workers.”

Measures that have been taken have been inadequate, it added. “We are of the view that effective concentrated efforts are required to change the situation”, the court said.

According to a 2011 census, internal migrants in India account for around 37 percent of the population. Most migrants leave their villages and local areas in search of work in big cities.