Stirring the communal cauldron in India 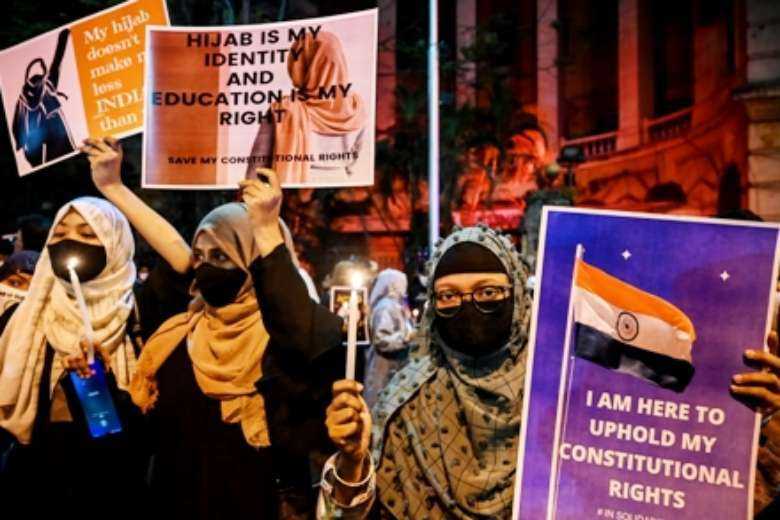 Indian Muslim women hold placards during a demonstration against the Karnataka hijab row in Kolkata on Feb. 11. (Photo: AFP)

Indian politics has yet again embarked on the path of communal polarization, this time on the issue of the hijab, a veil worn by Muslim women.

The protests began in the southern state of Karnataka at the Government Pre University College for Girls in Udupi when some Muslim students wearing the hijab were barred from attending classes on Feb. 4.

The state’s education board had issued a circular making it mandatory for students to wear uniforms approved by the school administration while disallowing religious practices on campus.

As protests spread across educational institutions in Karnataka, a three-day holiday was declared from Feb. 9-11 to cool frayed tempers even as a final verdict was awaited from Karnataka High Court.

Many including Gujarat-based Congress leader Ilyas Qureshi, a Muslim, suspect the timing of the controversy in the state ruled by the pro-Hindu Bharatiya Janata Party (BJP).

“The BJP spin masters are at work as the party is facing a certain defeat in Uttar Pradesh,” he told UCA News, referring to crucial provincial elections underway in five states including India’s largest province.

Foreign governments and diplomats should not interfere. This will flare up communal passions and harm Muslims in the long run

Former Jammu and Kashmir chief minister Mehbooba Mufti agreed that the BJP wanted to polarize the electorate on the basis of religion while also conspiring to “keep the Muslim girl child away from education.”

Naushad Khan, a trader in Delhi, was more concerned by the comments made by outsiders like US Ambassador at Large for International Religious Freedom Rashad Hussain, who tweeted that the “hijab bans in schools violate religious freedom and stigmatize and marginalize women and girls.”

“Foreign governments and diplomats should not interfere. This will flare up communal passions and harm Muslims in the long run,” Khan said.

Muslims have high stakes in the Uttar Pradesh polls where the BJP’s Chief Minister Yogi Adityanath was quick to grab the opportunity offered by the Karnataka controversy.

“We feel that the country should be run according to the constitution. Any attempt to run it according to Sharia [Islamic practices and laws] is not in the interest of the country,” he said during an interview to a news channel.

The BJP had benefited hugely from the religious polarization of votes in the 2017 assembly polls in Uttar Pradesh. But its prospects look bleak now with the northern state’s agrarian communities, both Hindu and Muslim, opposing the farm laws initiated by Prime Minister Narendra Modi’s government last year.

The Karnataka row over the hijab was hardly being discussed in the Muslim strongholds of Muzaffarnagar and Moradabad when this journalist visited the state. The focus was on the Yogi government’s "misgovernance."

Can the BJP save itself from defeat in the northern Hindi heartland of India by raising the hijab issue in a southern state? That remains to be seen.

But it certainly doesn’t bode well for the country and its highly cherished democratic polity.

India’s Foreign Ministry spokesman Arindam Bagchi said that “India’s constitutional framework and mechanisms, as well as our democratic ethos and polity, are the context in which issues are considered and resolved. Those who know India well would have a proper appreciation of these realities. Motivated comments on our internal issues are not welcome.”

His diplomatic comments were directed at the US official and Pakistan government. But not everybody in the country was convinced by his defense.

“Over the last five years, India has distinguished itself as a lynching nation. Muslims and Dalits have been publicly flogged and beaten to death by vigilante Hindu mobs in broad daylight,” said writer-activist Arundhati Roy.

The concerns of Muslims and Christians do not figure much under his authoritarian regime, even though PM Modi may visit the Vatican and invite Pope Francis to visit India

India has indeed seen the rise of a new, vocal elite who unabashedly proclaim their Hindu identity. Its national leaders including Modi and Rahul Gandhi of the Congress make it a point to make televised visits to temples during election campaigns.

In a Christian-dominated state like Nagaland in northeast India, no government function gets underway without prayers led by pastors or church elders.

The synthesis of religion and politics is near complete.

Political observer Vidyarthi Kumar feels the BJP has excelled in combining the spirit of its Hindutva (Hinduness) with its developmental agenda.

Its assertiveness has caused apprehensions among minority Muslims and Christians.

As former federal home minister P. Chidambaram observed while referring to Modi’s rise as India’s prime leader, “the fact is that the governments have become more authoritarian since 2014.”

The concerns of Muslims and Christians do not figure much under his authoritarian regime, even though PM Modi may visit the Vatican and invite Pope Francis to visit India.

LADISLAUS LOUIS D'SOUZA
The party [BJP] is facing certain defeat in the UP elections? I do hope it does come to pass exactly that way!
Reply